Haryana Results 2019: Controversial MLA Gopal Kanda Does Not Get To Play Kingmaker After All

Reports suggested that Gopal Kanda and another independent MLA had been flown to Delhi by a BJP MP last evening for discussions with the leadership. 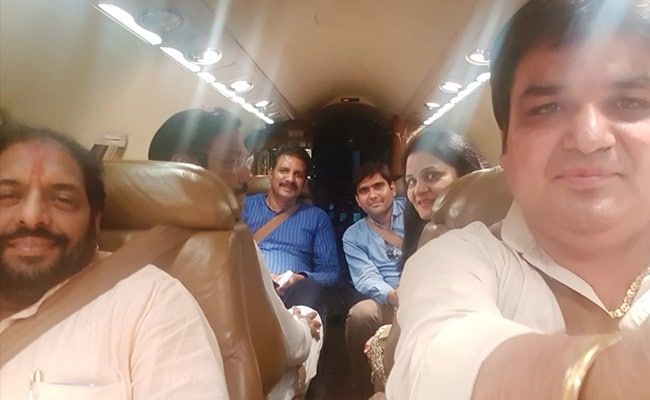 Gopal Kanda, the controversial MLA who pledged his unconditional support to the BJP to form government in Haryana, did not get to play kingmaker after all. The BJP, under attack from rivals as well as its own leaders for associating with the MLA, did not take his support. On Friday, the party announced its tie-up with Dushyant Chautala's Jannayak Janata Party (JJP), which has 10 MLAs.

As the counting of votes indicated a hung assembly on Thursday, reports suggested that Gopal Kanda and another independent MLA had been flown to Delhi by a BJP MP for discussions with the leadership. Photos of the two apparently on a special plane were in wide circulation online.

The BJP won 40 seats in the 90-member Haryana assembly and needs six more for a majority. Eight independent MLAs said they would support the party.

Dushyant Chautala, who founded his party after breaking away from the Indian National Lok Dal (INLD), remained non-committal on whether he would support the BJP or the Congress, which has 31 seats. He was back in relevance, with the BJP facing a huge backlash over Gopal Kanda.

This morning, Mr Kanda cited his family's deep connection with the BJP's ideological mentor Rashtriya Swayamsevak Sangh (RSS) and said he and the seven other independent MLAs would give unconditional support to the BJP.

From the BJP, however, there was silence. Sources say it was Kanda who on his own offered support; the BJP never asked him for it. Even Chief Minister ML Khattar was not in favour of it.

Sources said the party did not need the support of Kanda, with seven other independent MLAs taking it well past the post.

Amid outrage on social media, many in the BJP were discomfited at the implications of bringing on board Kanda, accused of abetting the suicide in 2012 of an airhostess who worked for his aviation company, Geetika Sharma. Her mother also committed suicide later.

Gopal Kanda, 53, was accused by Geetika Sharma of harassment in suicide notes. He was jailed for one year before being released on bail.

Kanda was a minister in the Congress government of Bhupinder Singh Hooda when the allegations erupted. He was forced to resign and he evaded arrest for days.

At the time, the BJP held several protests against Kanda and demanded his resignation and arrest - a fact that the Congress reminded the ruling party of.

Kanda was charged with rape, abetment to suicide, criminal conspiracy and criminal intimidation. The rape charges were dropped in 2014. After getting bail, he contested the Haryana polls and lost.

In 2016, Mr Kanda and his brother Govind were charged for alleged illegal property development in Sirsa. Other charges against him include tax evasion and cheating.

One of the BJP's senior leaders, Uma Bharti, tweeted: "I would like to request the party not to forget its moral foundation."

She added: "If Kanda is the same person who was the cause of a girl's suicide, the suicide of her mother and faces trial...whether he is innocent or guilty, the law will decide. But his winning an election does not absolve him. There are many factors in an election victory."

The Congress tweeted: "Once upon a time, the BJP took out rally against Gopal Kanda demanding his resignation and arrest. Now they are desperate to take his support in Haryana, he is accused of rape and murder. Where is Beti Bachao Beti Padhao now? This is a disgrace... Is he purified by supporting BJP."

Jaish Terrorist Killed In Encounter In Jammu And Kashmir's Kulgam