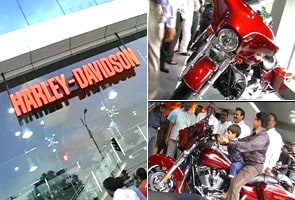 Hyderabad: Harley-Davidson, the USA-based heavyweight bike maker opened its first dealership outlet in the country in Hyderabad on Friday.

Though the company has identified dealers in Delhi, Mumbai, Chandigarh and Bangalore, the outlet in Hyderabad - Banjara Harley-Davidson - became the first to start operations.

"We will launch our bikes in other cities before the end of this year," said Anoop Prakash, Managing Director, Harley-Davidson India after the outlet was formally inaugurated by Telugu Film star N T Ramarao.

Prakash said the bike is perfectly suitable for Indian roads due to its weight and ruggedness.

Speaking about the Indian market for heavy weight bikes, he said last year as many as 700 heavy bikes of all brands, excluding Harley-Davidson were sold in the country.

Promoted
Listen to the latest songs, only on JioSaavn.com
Without revealing any figures, Prakash said they made enough investments in the country to last for the next 20 years. The company has launched 12 variants of the bikes in 883 cc to 1800 cc range in the Indian market.

He also said all the bikes are made in the USA and shipped to India. The company started bookings for the bikes since April this year and there is no waiting period. The bikes cost anything between Rs 7 lakh and Rs 35 lakh.