Hardeep Singh Puri, who lost the Lok Sabha polls from the Amritsar seat and is currently a Rajya Sabha lawmaker, has also been made a junior minister in the Commerce and Industry Ministry in which Piyush Goyal is the Cabinet minister. 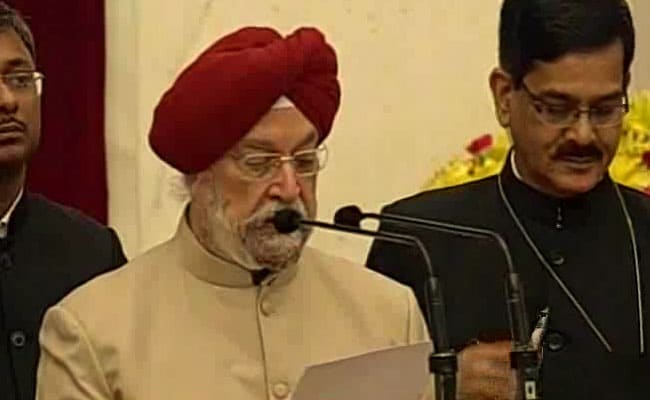 Hardeep Singh Puri, the new Civil Aviation Minister, took charge of office today amid distress in the sector that recently saw grounding of a private airline and concerns over debt-laden Air India, which the government wants to sell off.

After taking charge, Mr Puri, a former Indian Foreign Service officer, held a meeting with senior officials who prepped him about the promises made in the sector and the challenges ahead.

"I will meet you once I get to know about the sector," Mr Puri, who has been given the rank of Minister of State (Independent Charge), told reporters.

He succeeds Suresh Prabhu, who has been dropped from the Union council of ministers. In the first tenure of Prime Minister Narendra Modi''s government, Mr Puri held the Housing and Urban Affairs portfolio, which he has retained this time as well.

Mr Puri, who lost the Lok Sabha polls from the Amritsar seat and is currently a Rajya Sabha lawmaker, has also been made a junior minister in the Commerce and Industry Ministry in which Piyush Goyal is the Cabinet minister.

Ahead of the national polls, BJP in its manifesto had said that while it has operationalised 36 airports over the last five years, it plans to commission 100 airports in the coming years.

As Civil Aviation Minister, Mr Puri would be looking to deal with the challenges related to Air India's divestment, which the Centre tried last year but failed.

The government is also moving towards selling a few subsidiaries of the state-owned carrier, which have been in profit in the last few years.

With Jet Airways suspending its operations due to lack of funds, Mr Puri would have to take care of higher airfares, which resulted due to "low capacity-high demand" scenario.

He would also have to ensure that there is a coherent policy regarding allocation of slots that have become vacant after Jet Airways suspended its operations on April 17, amid pressure from airline companies for their allotment.