The TV channel had been censured by the Supreme Court two years ago for its Islamophobic content, with one judge calling its programming "rabid". 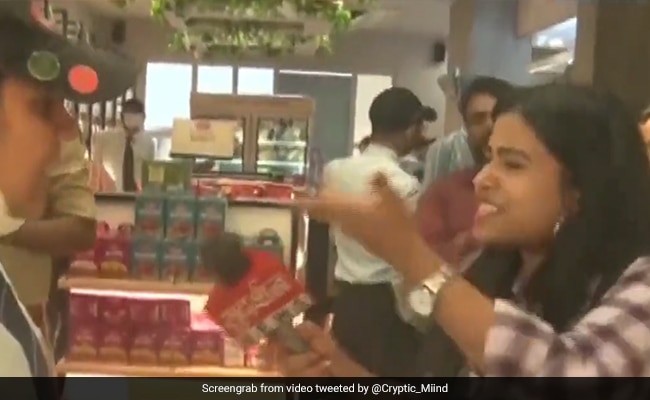 A Haldiram's store manager responded coolly to a shrill diatribe by a TV reporter.

An incensed TV reporter's invective over "Urdu" writing on a Haldiram's snack packet directed at a store manager has set off a fierce debate on social media, adding to the siege of the national discourse hijacked by objections to halal meat, the hijab and the Azaan.

"You can do whatever ma'am, Haldiram's will not entertain such tantrums," the store manager tells the reporter thrusting a mic and ranting about "Urdu writing" and "betraying Hindus who fast during Navratri".

The episode drew widespread condemnation on social media with some suggesting the writing on the packet is Arabic and is there because it is exported to the Middle East while others supplied examples of everything from Indian Railways signages to currency notes using Urdu text.

Here is some Urdu text. Will this reporter go to the Railways and ask what it is about? #Haldiramspic.twitter.com/DGZ8KDUoXv

The TV channel Sudarshan TV, a far-right broadcaster, has been censured by the Supreme Court in the past for its Islamophobic content but the government has allowed it to air programmes on subjects like a "conspiracy to infiltrate Muslims in government service".

The show was eventually stopped by the court which ruled, "An insidious attempt has been made to insinuate that the community is involved in a conspiracy to infiltrate the civil services. Several statements in the episodes, which have been drawn to the attention of the Court, are not just palpably erroneous but have been made in wanton disregard of the truth."

"The Sudarshan TV show on the infiltration of Muslims in Civil Services is insidious and rabid since it tends to target one particular community," Supreme Court judge Justice DY Chandrachud had said during the legal face-off over the channel's hatemongering two years ago.

"I saw one of the episodes and it was hurtful to watch. Many pictorials are offensive and need to be taken off," Justice Indu Malhotra had said.