The video shows a police officer from the Gwalior Railway Police station. repeatedly assaulting a woman with a lathi and dragging her by her hair 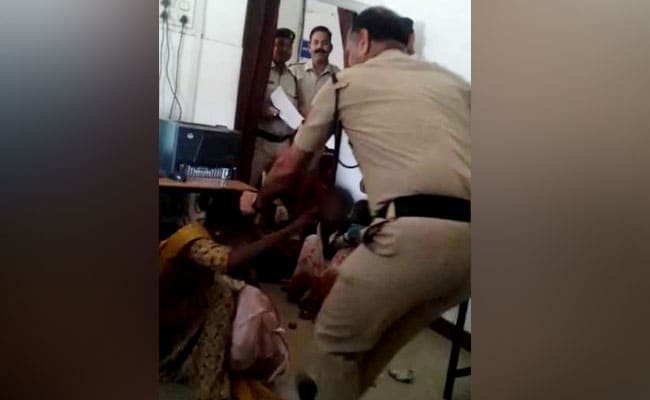 Gwalior police have claimed the video of a cop hitting a woman is two years old.

A shocking video showing an as-yet-unidentified Madhya Pradesh police officer repeatedly beating a woman with a lathi has emerged. The attack is believed to have taken place inside the Gwalior Railway Police station.

The video starts with three women, each of whom is holding a child, squatting on the floor. The police officer in question gestures at them to get up, at which point they start crawling away while crying and pleading.

The officer then strikes one woman repeatedly with his lathi before grabbing her hair, forcing her to stand up and then hitting her on her back before gesturing to something on the floor.

Still pleading and crying, the woman who was assaulted holds her hand up in defence before packing her belongings into a bag.

Three other police officers are seen in the video, at least one of whom appears to be smiling while the women are threatened and assaulted.

Gwalior police have claimed the video is two years old and that they were unaware of its existence until it was spotted on social media. They have also said the officer in question is away on poll duty and will be questioned on his return.

Gwalior will vote on May 12 during the sixth phase of the ongoing Lok Sabha election, with results  to be declared on May 23. The battle for the seat is between Narendra Singh Tomar of the BJP, who won the 2014 election from here, and Ashok Singh of the Congress.

A similarly brutal assault by a constable from the same station was recorded in August 2016.

In the video, the constable is seen hitting the boy, allegedly a petty thief, repeatedly before grabbing him by his neck and throwing him to the ground. He was later suspended and inquiry was ordered.

The entire assault happened on a crowded railway platform with onlookers either staring without reacting or going about their business.