Shahidi Diwas: Guru Arjan Dev was captured by Mughal Emperor Jahangir in 1606 and imprisoned because of his increasing influence among people and also the spread of Sikhism 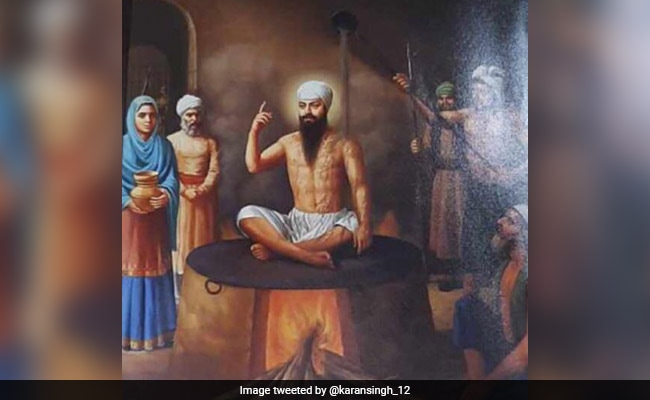 The fifth guru of the Sikhs, Guru Arjan Dev, was the first of the two Gurus martyred in the Sikh faith. Born in 1563, he completed the construction of the Golden Temple in Amritsar and also compiled the Adi Granth, the religious scripture of the Sikhs encompassing spiritual poetry and musical ragas. It was installed at Harmandir Sahib.

The sacred scripture later came to be known as the Guru Granth Sahib.Guru Arjan Dev was captured by Mughal Emperor Jahangir in 1606 and imprisoned in Lahore Fort because of his increasing influence among people and also the spread of Sikhism. It is also believed that Guru Arjan Dev blessed the emperor's rebellious son Khusrau, which outraged Jahangir and he ordered the Guru's execution.

Guru Arjan Dev was made to sit on burning hot sheet/plate and hot sand was poured on him. After 5 days of torture, he was taken for bath in the river. He entered the river but was never seen again.

His martyrdom is remembered as Shaheedi Divas of Guru Arjan, which annually occurs in May or June.

Guru Arjan Dev was born in Goindval Sahib, Tarn Taaran, India. His maternal grandfather "Guru Amardas" and father "Guru Ramdas" were respectively the third and fourth Guru of the Sikhs.

Guru Arjan Dev's son, Hargobind Singh, became the sixth guru of the Sikhs after him.

In 1588 AD, Arjan Dev had laid the foundation of Golden Temple and also prepared the map of the temple. The doors of the temple on all sides signify the acceptance of all 4 castes and religions. "Guru Arjan Dev Ji"