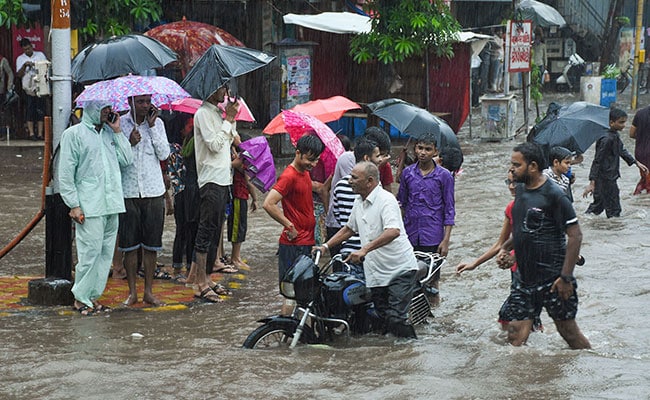 Commuters wade through a waterlogged area during heavy rain in Surat. (PTI photo)

Due to heavy rains, many rivers are flowing near the danger mark. Four National Disaster Response Force teams have been deployed in various districts of the south amid the weather situation.

Mangrol in Surat received 269 mm rainfall in the 24 hours till 8 am on Saturday, as per the State Emergency Operation Centre (SEOC) data.

The downpour resulted into several areas and arterial roads getting water-logged and the Kim and Auranga rivers flowing near the danger mark, officials said.

Commuters faced difficulties as many roads in Surat were inundated. The district administration has declared holiday for schools on Saturday.

In Vadodara, the water level of the Vishwamitri river which flows through the city fell below the danger mark.

The district administration has deployed 78 water pumps to flush out water from flooded areas in the city.

Teams of medical personnel have been deployed to control water-borne diseases.

"We have deployed one team each of the NDRF and the SDRF in Olpad, which received heavy rainfall," he said.

Vapi in Valsad district of south Gujarat receicved 221 mm rains in the last 24 hours ending 8 am on Saturday, as per the SEOC data.

Auranga river that passes through Valsad district was flowing at the danger mark, prompting the local administration to issue an alert.

"Due to heavy rains in Dharampur (in Vansad) in the last 24 hours, Auranga river has received a huge inflow of water due to which it is flowing at the danger level. We have alerted people living in the low-lying areas and have dispatched officials. Precautionary steps are being taken and a team of NDRF has also been put on stand-by," said Valsad Collector C R Kharsan.

The water level of the Damanganga river rose due to the release of 1.60 lakh cusecs water from the Madhuban dam, he said.

Meanwhile, fire personnel rescued dozens of students of a primary school who were trapped in water in a village due to heavy rains.

Several villages of Bharuch and Navsari districts were also put on alert.

In Vadodara, which had witnessed the rain fury on Thursday, water is being flushed out from flooded areas with the help of 78 motor pumps.

"Over 11,000 people were rescued and evacuated from Vadodara city and surrounding areas following heavy rains that had caused flooding in the area. A total 11 teams of NDRF and six teams of SDRF shifted more than 9000 people from low-lying areas," said district collector Shalini Agarwal.

Gujarat has received 51.49 per cent of annual average rainfall for this season till Saturday, the SEOC data showed, with districts of south Gujarat receiving the maximum rainfall.