The BJP was set to win by a landslide in the Gujarat urban civic polls today as votes were counted for hundreds of seats across six municipal corporations, including Ahmedabad and Vadodara. The poll results are crucial for the ruling party at a time it is facing massive farmer protests since November against three central laws and anger over rising fuel prices in the country.

This election is also a test for the BJP and Chief Minister Vijay Rupani ahead of state polls in Gujarat next year.

Of 576 seats that voted on Sunday, the BJP has won and is leading in 409 seats. The Congress is a distant second with just 43 seats.  Arvind Kejriwal's Aam Aadmi Party (AAP), contesting the polls for the first time, won 27 seats, all from Surat, delivering a big jolt to the Congress.

Results of municipal elections across the state clearly show the unwavering faith people have towards politics of development and good governance.

Grateful to the people of the state for trusting BJP yet again.

Always an honour to serve Gujarat.

I would like to appreciate the efforts of each and every Karyakarta of @BJP4Gujarat, who reached out to people and elaborated on our Party's vision for the state. The Gujarat government's pro-people policies have positively impacted the entire state.

Today's win across Gujarat is very special. For a party that is serving in a state for over two decades to record such a phenomenal win is noteworthy. It is heartening to see widespread support from all sections of society, particularly the youth of Gujarat towards BJP.

In the Ahmedabad Municipal Corporation, which is the biggest, the BJP has won or is ahead in 101 seats while the Congress has 15. Other parties are at 1.

In Surat, which has the second biggest civic body in Gujarat, the BJP widened the gap, with gains in 69 seats to the Congress's seven. AAP won 27 seats at the cost of the Congress.

In Vadodara, the BJP is ahead in 48 seats while the Congress is leading in seven seats.

In Rajkot, the BJP leading in 56 seats. The Congress has received a massive shock and is yet to win any seat in this town. Here, too, it is the AAP effect that appears to have dented the Congress.

The victory, bigger for the BJP than the last civic elections, shows that its hold over the urban areas of Gujarat is intact.

The BJP has been in power in the Surat municipal corporation since 1990 and in Bhawnagar and Jamnagar since 1995.

The results are a big victory for Chief Minister Vijay Rupani, who failed to deliver for the BJP in the last state election when the party barely managed to keep its government against a strong challenge from the Congress.

Many central ministers belonging to the state had campaigned for the civic election. The party had denied tickets to many senior leaders and had expected the resentment to hurt its prospects.

The Congress's performance is far worse than in the previous municipal polls. AAP has stunned the Congress in Surat, where the Patidar Aarakshan Samiti (PAS) opposed the Congress. Sensing a chance, AAP fielded candidates of the powerful Patidar community and the strategy paid well.

The Congress had emerged as a strong opposition in Gujarat after the 2017 state election by winning 78 seats. But ahead of another election, its abysmal performance signals a huge fall.

The Congress's performance is far worse than in the previous municipal polls. AAP has stunned the Congress in Surat, where the Patidar Aarakshan Samiti (PAS) opposed the Congress. Sensing a chance, AAP fielded candidates of the powerful Patidar community and the strategy paid well. 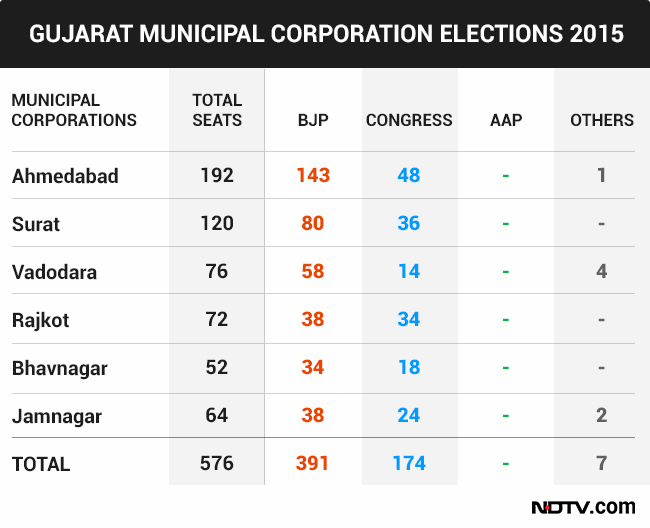