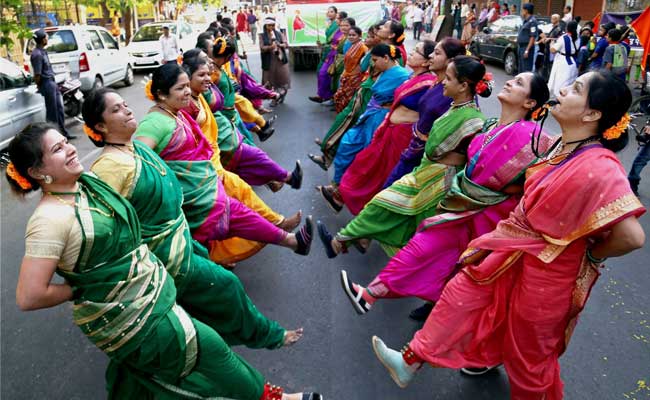 This year Gudi Padwa coincides with the beginning of the nine-day celebrations of Chaitra Navratri.

New Delhi: Rangoli, Puran Poli, flowers and new clothes, Maharashtra is celebrating Gudi Padwa today. Gudi Padwa marks the beginning of the New Year. Not only Maharashtra, other states in India like Karnataka and Andhra Pradesh also celebrate the day with much fanfare. In Andhra Pradesh, it is called Ugadi while in Karnataka it's called Yugadi and Kashmiri Pandits celebrate the day as Navreh.

Gudi Padwa or 'Chaitra Shukla Pratipada' signifies the end of one season and the beginning of another, as farmers prepare to harvest the rabi crop and prepare for the new sowing season.

Legend says on Gudi Padwa, Lord Brahma created the universe which marked the beginning of 'Satyuga'. Traditionally on this day, devotees worship Lord Bhrahma, and then hoist a Gudi or a doll to invoke Lord Vishnu or the savior to seek his blessings.

Putting up the Gudi is a key part of the festival. People buy green or yellow silk cloth, tie it on a bamboo stick, decorate it with red and yellow flowers, an inverted copper or silver pot and place it at the entrance or outside the window.

Gudi Padwa also marks a significant movement of the sun - it's the March or the vernal equinox in the Northern Hemisphere when the sun crosses the equator and we see roughly equal days and nights.

Promoted
Listen to the latest songs, only on JioSaavn.com
Not only in India, people in many parts of the world celebrate this day with food and festivities. On March equinox, the Japanese remember their ancestors and the Chinese observe an ancient custom called balancing an egg, symbolizing fertility and prosperity.

This year Gudi Padwa coincides with the beginning of the nine-day celebrations of Chaitra Navratri, when devotees worship Goddess Durga in her nine avatars.