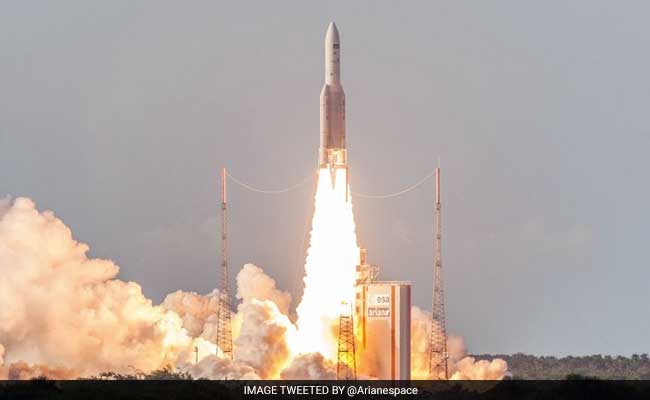 GSAT-18 built by the ISRO aims at providing telecommunications services for the country.

Bengaluru: India's latest communication satellite GSAT-18 was today successfully launched by a heavy duty rocket of Arianespace from the spaceport of Kourou in French Guiana.

The launch was originally scheduled for yesterday, but deferred by 24 hours owing to unfavourable weather conditions at Kourou, a French territory located in northeastern coast of South America.

With the weather being clear today, the European launcher Ariane-5 VA-231 blasted off at around 2 AM (IST) and injected GSAT-18 shortly after orbiting co-passenger Sky Muster II satellite for Australian operator nbn (National Broadband Network) in a flawless flight lasting about 32 minutes.

GSAT-18 that aims at providing telecommunications services for the country by strengthening ISRO's current fleet of 14 operational telecom satellites was launched into a Geosynchronous Transfer Orbit (GTO) about 32 minutes after the lift-off.

GSAT-18 is the 20th satellite from ISRO to be launched by the European space agency and the mission is the 280th for Arianespace launcher family.

ISRO, which has been dependent on Ariane-5 rocket for carrying its heavier satellites, is developing GSLV Mk III for this purpose.

Launched for India's space agency & more to come. Congrats!" ISRO Chairman A S Kiran Kumar, who watched the launch from the mission control centre, left shortly after lift-off, and his message was read out later by one of his senior colleagues.

"I am really delighted this evening having witnessed another glorious and flawless lift-off of Ariane-5 VA-231 flight that carried GSAT-18 and Sky Muster II successfully. Like on all previous occasions, Arianespace has again provided us a magnificient textbook launch," Mr Kumar said.

Designed to provide continuity of services on operational satellites in these bands, GSAT-18 with a mission life of about 15 years, carries Ku-band beacon as well to help in accurately pointing ground antennas towards the satellite.

With GSAT-18's injection into GTO, ISRO's Master Control Facility (MCF) at Hassan in Karnataka takes control of the satellite and will perform the initial orbit raising manoeuvres using the Liquid Apogee Motor (LAM) of the satellite, placing it in a circular Geostationary Orbit.

Following this, the deployment of appendages such as the solar panels and antennas as well as three axis stabilisation of the satellite will be performed, and GSAT-18 will be positioned at 74 deg East longitude and co-located with other operational satellites, ISRO said.

Mr Kumar said the next step after the successful launch of GSAT-18 was to carry out a series of manoeuvres before positioning it in its orbital location.

"The necessary preparations have been made and our team back in India is working on mission operations at Master Control Facility, Hassan," he said.

"GSAT 18 is an important satellite for us that will enable the continuity of the vital communication services in our country by replacing the currently ageing satellites," the ISRO chief said.

Television, telecommunication, VSAT and digital satellite news gathering were a few of the services that GSAT 18 will support in coming days, he added.

Promoted
Listen to the latest songs, only on JioSaavn.com
Pointing out that two more satellites GSAT 17 and GSAT 11 were getting ready for the launch by Arianespace during early next year, Mr Kumar said "realisation of both these satellites is in advanced stage".

"While GSAT 17 is an important satellite for replacing our satellites, GSAT 11 will be the first generation of high- throughput satellite of ISRO. Both of these upcoming launches are crucial for the Indian Space Programme," he added.