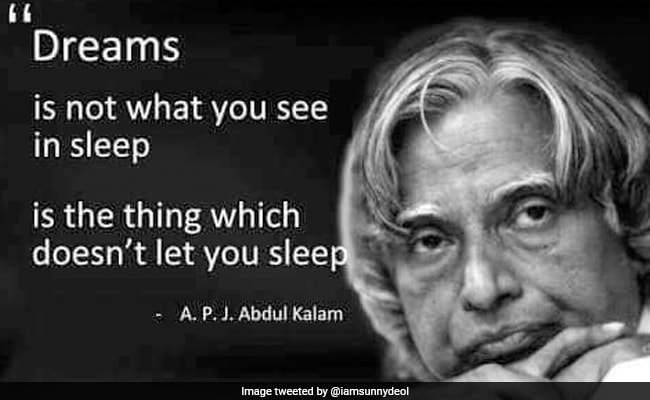 Sunny Deol posted a picture of the ''missile man'' along with a quote. (Twitter)

The actor-turned-politician shared a picture of the ''missile man'' along with a quote by him on his Twitter handle.

The quote by the late president read, "Dream is not the thing you see in sleep but is that thing that doesn't let you sleep."

Avul Pakir Jainulabdeen Abdul Kalam, also known as ''Missile Man of India'' for his contributions towards the development of the country''s missile projects was born on October 15, 1931, at Rameshwaram in Tamil Nadu.

In 2002, Dr Kalam became the 11th President of India and was popularly known as the "People's President" for his friendly nature to one and all.

The former President suffered a cardiac arrest on July 27, 2015, and passed away while giving a lecture at the Indian Institute of Management Shillong.