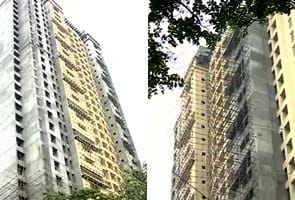 Mumbai: Did two former Army chiefs fight their way into a high-rise in Mumbai, Adarsh Society, originally meant for war widows and veterans?

NDTV has learnt that neither General NC Vij nor General Deepak Kapoor fulfill a key criteria, that they should have lived in Maharashtra for 15 years, which is also the reason why the then Mumbai collector had rejected their application for a flat in 2008.

Yet they persisted and finally got a clearance from the state government in 2009. The reasoning: recognition of their service to the nation.

While the allotments were strictly legal, the question is should the government have bent the rules?

Reacting to our report, General NC Vij told NDTV, "I got the allotment in 2009, five years after I retired. So where is the question of forcing my way through? I wrote to the chief minister and he was kind to waive the 15 year domicile criteria."

As the controversies widen, the promoter of the Adarsh Society furnished papers to show they had all the clearances.

"This society was never meant for only for war widows. It is a general society and all members have been approved by the state government," said Brigadier (retired) MM Wanchu, President, Adarsh Housing Society.

Yet the allotments show a clear conflict of interest. Relatives of several officers involved in clearances for the project got flats there.


The officers we contacted either refused to comment or said the flats allotted to their families were cleared by other officers, but as more dirt emerges on this controversial society, it's sticking not just to the military but also the bureaucracy.
Comments
MumbaiArmy land scamAdarsh Society