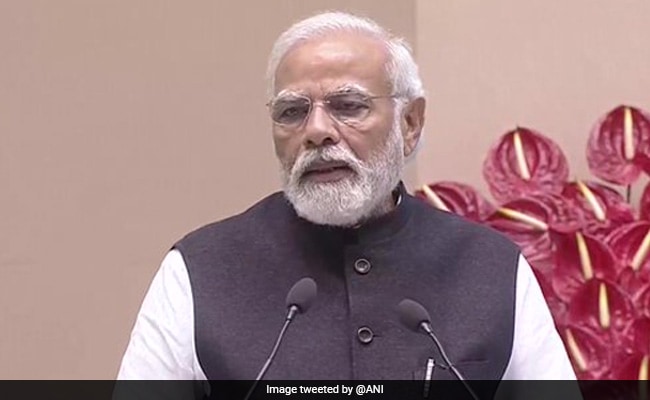 The government supported them with full force in the form of a partner in progress, PM said.

Prime Minister Narendra Modi on Friday said the Centre is moving forward in the direction where the government will encourage the private sector as a partner in progress.

Prime Minister attended the first 'Arun Jaitley Memorial Lecture' (AJML) held at Vigyan Bhavan today. The event was organised by the Department of Economic Affairs, Ministry of Finance in recognition of the former Union Finance Minister Arun Jaitley's invaluable contribution to the nation.

Referring to the manufacturing of COVID vaccines, Prime Minister said, "Private players of our country have done a very good job. The government supported them with full force in the form of a partner in progress. India's recovery from the COVID pandemic is reflective of making a people-centric policy instead of a populist impulse.

He said before 2014, only 50 medical colleges were built in 10 years in the country while 209 new medical colleges have been built in India in the last 7-8 years which is more than 4 times than before.
He said there has been an increase of 75 per cent in undergraduate medical seats in India in the last 7-8 years and the annual total medical seats have almost doubled.

Emphasising on inclusive growth, Prime Minister Modi said India is preparing a roadmap for the coming 25 years with reforms by conviction rather than reforms by compulsion.

"The gist of my experiences of 20 years as Head of Government is that - without inclusion, real growth is not possible. And, without growth, even the goal of inclusion cannot be achieved. Today's India is preparing a roadmap for the coming 25 years with reforms by conviction rather than reforms by compulsion," he said.

He said 9 crore free cooking gas connections were given, 10 crore toilets were constructed and 45 crore bank accounts were opened in the last 8 years.

Criticizing previous governments over alleged reluctance to bring reforms in the policy, PM said, "Earlier, major reforms took place in India only when the earlier governments were left with no other option. We do not consider reforms as a necessary evil but win-win choice, in which national interest is the public interest."

Prime Minister said his government did not make policies under the pressure of populist impulses.

"Our policy-making is based on the pulse of the people. We listen to more and more people and understand their needs and aspiration. That is why we did not let the policy come under the pressure of populist impulses," he said.

PM Modi further expressed grief over the death of former Japanese PM Shinzo Abe who died on Friday after he was shot at during a campaign speech in Nara City, western Japan.

Prime Minister said, "Today is a day of irreparable loss and unbearable pain for me. My close friend and former Prime Minister of Japan. Shinzo Abe is no more with us. Abe ji was not only my friend, but he was also a reliable friend of India."

"During his tenure, India-Japan political ties not only achieved a new height, but we also took forward the relations related to the common heritage of both the countries. Shinzo Abe ji will remain in the minds of the people of India for years and years through the work we are doing here with the help of Japan," he added.

Remembering former Union Minister Arun Jaitley, Prime Minister said, "This event is dedicated to Arun Jaitley ji. When we remember the bygone days, I remember many things about them, many incidents related to him. We all were in awe of his oratory. His personality was full of diversity, his nature was omniscient."

Arun Jaitley passed away on August 24, 2019, at the All India Institute of Medical Sciences (AIIMS) in Delhi. He was 66.
Jaitley first became a Cabinet Minister in the government of former Prime Minister Atal Bihari Vajpayee in 2000. He then went on to serve as the Leader of the Opposition in the Rajya Sabha from June 2009.

He was appointed the Finance Minister in the first term of the Prime Minister Narendra Modi government in 2014. He opted out of the 2019 Lok Sabha elections citing health reasons.