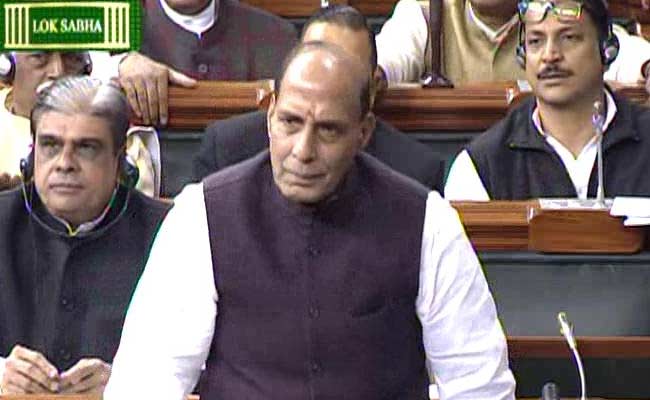 New Delhi: Home Minister Rajnath Singh on Tuesday said anyone seeking to disturb communal amity will not be spared and the government was prepared for a CBI probe into the lynching of a Muslim man in Dadri so that the truth comes out.

Replying to a debate in the Lok Sabha on intolerance, Mr Singh said the allegations against the government over intolerance started with the lynching.

He said the preliminary report of the Uttar Pradesh government did not mention communalism, beef or any planned murder.

He said the initial investigation by Uttar Pradesh did not reach a conclusion and the matter can be handed over to the Central Bureau of Investigation (CBI) if the state government wanted it.

"The central government is prepared (for a CBI probe) so that the truth comes out," he said.

As the home minister talked of differences between Islamic sects in countries such as Iraq and Bahrain, opposition members protested and asked him to focus on the situation in India and controversial remarks of some ministers.

He said "India is, was, and will be tolerant", and the subject of the debate was "dangerous and self-destroying".

"The country will decide who is intolerant. As far as the government is concerned, we will not allow intolerance in any circumstances," the home minister said.

"If anybody tries to disturb communal amity, he will not be spared," he said.

Mr Singh reached out to the opposition and promised that mistakes, if any, would be rectified by the government.

The home minister said he was prepared to meet the intellectuals who have returned awards. "Let's talk," he said, adding that the government was willing to take any step towards harmony and correct mistakes if any.

Rajnath Singh said an attempt was made to defame the Modi government by returning literary and other awards.