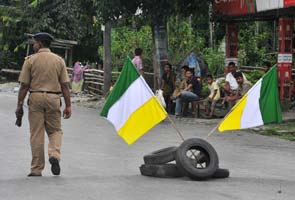 Darjeeling: After West Bengal Governor M.K. Narayanan expressed his willingness for a Gorkhaland dialogue, the Gorkha Janmukti Morcha (GJM) on Saturday said it was agreeable to talk to him but "preferred" a conversation with the central government.

"We can talk to the governor if he wants, but then the issue of granting a separate Gorkhaland concerns the central government and we prefer talking to the central leadership," GJM General Secretary Roshan Giri said.

The GJM which has intensified its separatist movement by clamping an indefinite shutdown in the Darjeeling hills since August 3, has, however, maintained it was not willing to talk to the Mamata Banerjee-led Trinamool Congress government in the state.

Mr Narayanan, who earlier had refused to mediate in the matter, later said he was willing to talk to the GJM provided the Gorkha outfit too was willing for a dialogue.

Continuing its aggressive stand against the Banerjee regime, the GJM on Saturday said its three legislators would now sit in the opposition bench in the state Assembly.

GJM formed the Gorkhaland Joint Action Committee (GJAC) after joining hands with several other parties. The GJAC will now spearhead the separatist movement.

GJM said the hill development body Gorkhaland Territorial Administration (GTA) "is a failure and will be repealed soon".

Promoted
Listen to the latest songs, only on JioSaavn.com
Armed with more powers than its predecessor, the Darjeeling Gorkha Hill Council formed in the late 1980s, the GTA was created on July 18, 2011 via a tripartite agreement signed between the GJM and the central and state governments.