"P L Deshpande's Birth Anniversary: Born on this day in 1919 in Bombay (now Mumbai), "Pu La" was renowned for his signature style of joyful humor and satire. 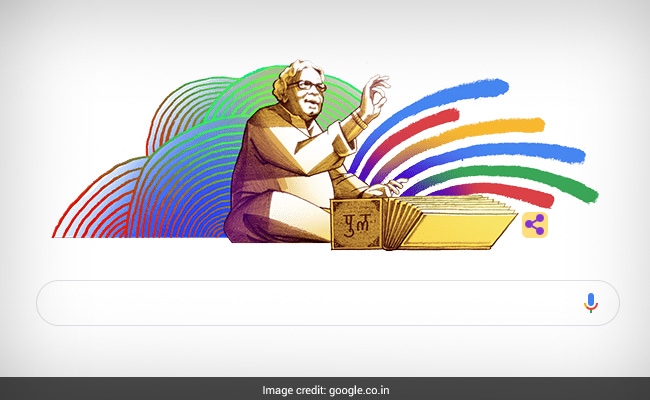 Purushottam Laxman Deshpande was renowned for his signature style of joyful humor and satire.

The doodle depicts the legendary Indian writer, playwright, musician, composer, actor, director, and philanthropist with his harmonium, as he raises his free hand to underscore a note.

"Being born and brought up in Mumbai/Maharashtra, one comes across Pu La Deshpande's name and works constantly in popular culture - music, writing, films, theatre, literature, and more. He was known to be a sharp observer of life, and one can see that in his literary work. There is a wildly popular Marathi song we were exposed to as kids in school called 'Naach re mora' (dance peacock, dance) - I learnt much later (to my surprise) that he composed the song," says Mumbai-based artist Sameer Kulavoor, who designed the doodle.

Born on this day in 1919 in Bombay (now Mumbai), "Pu La"  was renowned for his signature style of joyful humor and satire. He brought smiles to the faces of countless readers and audiences with his multifaceted contributions to Marathi literature and the performing arts.

He earned a master's degree and served as a college lecturer before he began to pursue a career in music. A master of the harmonium, he played as an accompanist for acclaimed vocal artists of the day and released his own hit recordings as well. Apart from music, Pu La Deshpande also had prolific collection of writing which included novels, essays, comedy books, travelogues, children's plays - in the late 1940s, his writing premiered in Bombay magazine.

In addition, Deshpande acted in dozens of films, many of which he directed himself.

In the 1990s, Deshpande established a philanthropic foundation,  which in the years since has carried on his positive legacy through the promotion of a variety of social and cultural causes.