"Go To Moon": BJP Leader To Adoor Gopalakrishnan After Letter To PM 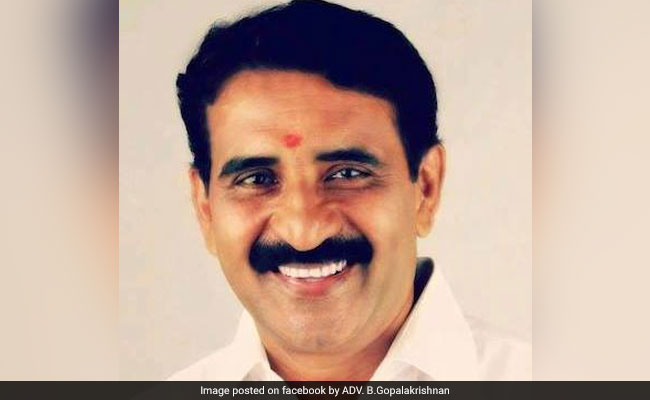 A day after Adoor Gopalakrishnan and others raised voice against violence in the name of religion, a BJP leader in Kerala on Thursday hit out at the renowned auteur saying he was free to shift to the Moon or any other planet if he was unable to tolerate those chanting "Jai Sri Ram."

As the comments by BJP spokesman B Gopalakrishnan kicked up a controversy, Adoor Gopalakrishnan said their letter voicing concern was neither against the government, nor against those chanting ''Jai Sri Ram'', but against incidents of lynching using the "chant as a war cry".

In a Facebook post, the BJP leader said Adoor Gopalakrishnan was a respected film maker, but he cannot ''insult'' the culture of the country.

This being the Ramayana month, which is observed in Kerala from July 17 to August 16, people will chant ''Jai Sri Ram'', he said.

"If you are not keen to hear it (Jai Sri Ram), please register your name at Sriharikota and you can go to the moon", he told Adoor Gopalakrishnan in the sarcasm laced post, adding it will be better if he changed his name.

His outbursts came a day after 49 eminent citizens, including Adoor, Gopalakrishnan wrote to Prime Minister Narendra Modi expressing concern that ''Jai Shri Ram'' had become a war cry with many lynchings taking place.

Reacting to the outbursts, Adoor Gopalakrishnan said their letter was neither against the government, nor against those chanting ''Jai Sri Ram'', but against the increasing incidents of lynching using the "chant as a war cry".

"In the letter we have mentioned that members of the minority community are are being attacked by mobs for minor incidents and forced to chant Jai Sri Ram. I feel so sad about it. I am a devotee. Its sad to see that Lord Ram, who is considered "mathruka purush" (model man), being insulted in such ways", he told reporters in Thiruvananthapuram.

Mr Vijayan in a statement said: "None need think that they can oust those having a contrary opinion. There is no question of allowing any such moves."

Noting that Adoor Gopalakrishnan's films brought international accolades to the state, he said the "sangh parivar threat" against the renowned film maker was not acceptable and should be condemned.

The cultural society should strongly defend any intolerant moves against such a person, he added.

Adoor Gopalakrishnan said the ''attack'' on the minority community does not fit in a democratic country like India and that was why they responded by writing the letter, he said adding everyone had the right to live and violation of this right was wrong.

The filmmaker also said they were not a group of people who were given a responsibility to respond to everything.

"None of us are politicians. All are into various fields. We just have democracy in front of us. Everyone has got their right to live. Violation of this Right is wrong. If the government fails to take action against this. It will cause unrest in the society. We will have to pay a huge price", he said.

Most of the accused in lynching cases go "scot free" without facing any penal action and this might fuel more such incidents, the renowned director said.

Most of them expect that they can escape on the pretext of a mob attack. All those who were part of such violent mob should be given capital punishment, he said.

"None of us have criticised anyone or said anything against the government. There is no need to see any of us as enemies", he said.

The BJP leader said: "If Gandhiji was alive today, he would have observed a fast in front of Adoor''s house".

He alleged West Bengal Chief Minister Mamata Banerjee had put behind bars those chanting ''Jai Sri Ram'' while Vijayan ''detained'' Ayyappa devotees for chanting ''Ayyappa sarnam'' and had imposed prohibitory orders against devotees at the height of the Sabarimala protests last year over women''s entry.

He also wondered why Adoor Gopalakrishnan failed to react when a student was stabbed in the university college here and asked if it was a case of "sour grapes".

Well known director and Kerala Chalachitra Academy Chairman Kamal and award winning film maker T V Chandran were among those who condemned the statement of the BJP leader.

Concerned at the number of "religious identity-based hate crimes" in the county, the group of eminent citizens had said in the letter that ''Jai Shri Ram'' has become a provocative war cry with many lynchings taking place in its name.