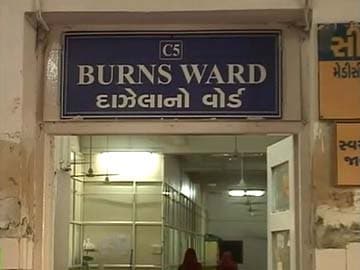 Ahmedabad: A teenaged girl was set on fire on Sunday at Sayla village in Surendranagar district of Gujarat, allegedly by her neighbours, after a feud about an overflowing sewage line.

The girl, who suffered from serious burns, has been admitted to a hospital in Ahmedabad.

The girl's family has claimed that timely action by the cops could have averted the tragedy.

The 15-year-old girl from a Dalit family had recently passed her class 10 exams, scoring 70 per cent.

According to the police, the girl was alone at home on Sunday when members of a neighbouring family barged in and threatened her.

The girl's family alleges that her neighbours threatened to kill her if the sewage line was not repaired.

When the girl informed her mother about the threats, she approached the police.

The police did register a complaint, says the girl's family, but they didn't visit the area to investigate the matter.

When the girl's mother returned home, some members of the neighbouring family again forcibly entered the house, poured kerosene on the girl and set her on fire.

"They had threatened to kill her. The police did register a non-cognisable offence, but they did not come to our house,'' said the victim's brother Anand Parmar.

The girl's family members have alleged that authorities at the local government hospital told them to get her admitted to the civil hospital in Ahmedabad, but didn't offer any help.

The police have arrested three men in connection with the case, including one Sunera, the prime accused.

Promoted
Listen to the latest songs, only on JioSaavn.com
The police have denied charges of delayed action; "A complaint was registered immediately but the incident took place before the police could reach the spot, begin investigations or take preventive action," said Surendranagar Superintendent of Police D N Patel.

Reacting to the family's allegation against the local hospital, District collector K B Bhatt said, "If the family is alleging that the hospital did not take the required steps, we will probe the matter".
Comments
GirlFireNeighboursSaylaSurendranagarGujarat