Responding to the attacks, Shabana Azmi today said her criticism of the government was not reserved to the BJP alone. 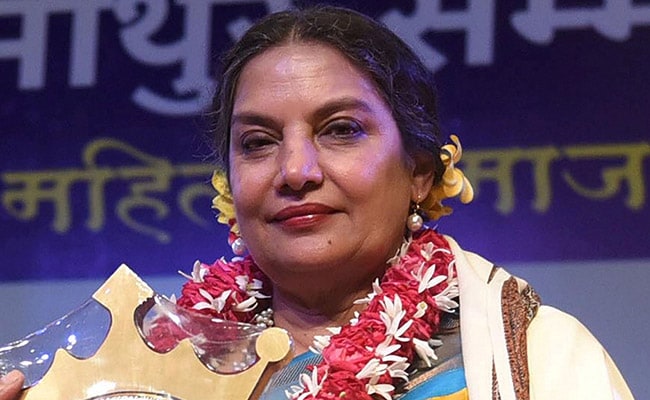 Sharing a video of actor saying, "If we criticise the government we are branded as anti-nationals", the BJP leader tweeted in Hindi, "Shabana Azmi is a new leader of 'tukde tukde' gang and 'award wapsi' gang'".

Mr Singh, known for controversial comments and often targeting minorities, was referring to terms used by right-wing commentators against their left-wing counterparts, accusing them of separatism and selective outrage. During the Lok Sabha election campaign, Prime Minister Narendra Modi too had used the term "tukde tukde gang" to attack the opposition Congress.

Responding to the criticism, Ms Azmi today said her criticism of the government was not reserved to the BJP alone and that she had criticised the Congress when it was in power over the murder of playright Safdar Hashmi in 1989.

4 d record in Safdar Hashmi murder I took on HKL Bhagat of Congress publicly.I challenged Imam Bukhari on national TV 4 which he called me a naachnewali n was condemned by both Houses of Parliament.Hve spoken against triple talaq n halala repeatedly so who is selective ?

Ms Azmi, who has often been under fire from right-wing users on social media for speaking on national issues, said at an event in Indore on Saturday that anyone who criticises the government is branded as an anti-national.

"It is always necessary that we point out our flaws for the betterment of our country. If we do not, how can our conditions improve? But the atmosphere is such that if we criticise the government we are branded as anti-nationals. We should not be afraid, nobody needs their certificate," Ms Azmi said without naming any political party.

"We have grown up in 'Ganga-Jamuni' (composite) culture. We should fight the situation and not kneel before it. India is a beautiful country. Any attempt to divide people cannot be good for this country," she said.