General Rawat also raised the issue of Article 370 and, in a subtle reference to the increase in terrorist activity in J&K since the centre's controversial decision on Article 370, said Pakistan had "woken up and raised the ante" over Jammu and Kashmir

In a strongly worded message, Army Chief Bipin Rawat on Friday described Pakistan-occupied Kashmir (PoK) as a "terrorist-controlled country or a terrorist-controlled part of Pakistan". Delivering the KM Cariappa Memorial Lecture in Delhi, General Rawat raised the issue of Article 370 and, in a reference to the increase in terrorist activity in Jammu and Kashmir since the centre's controversial decision, said Pakistan had "woken up and raised the ante" over Jammu and Kashmir".

The Army chief also referenced the recent spate of attacks on apple traders in Jammu and Kashmir, calling it "an attempt by terrorists who control PoK to disrupt and prevent normalcy from being attained".

"There is an attempt being made by terrorists who control PoK to disrupt and prevent normalcy from being attained. What we've been seeing is killing of apple traders and drivers from outside the state ferrying apple crop, preventing of shops from opening, the threatening of children from going to schools... all this is the part of the narrative of terrorists," he said.

Sources have said terrorists have been targeting labourers who have come to Jammu and Kashmir from outside the state to create fear among them and disrupt trade.

India has ramped up pressure on Pakistan in recent weeks, with both General Rawat and Defence Minister Rajnath Singh cautioning it against aiding terrorists in their infiltration attempts. It has also came under scrutiny from global anti-terror watchdog Financial Action Task Force (FATF), which has retained it on a "grey list" of countries whose domestic laws are considered too weak to tackle the challenge of terrorism financing.

#WATCH Delhi: Army Chief General Bipin Rawat says, "...The territory which has been illegally occupied by Pakistan is not controlled by the Pakistani establishment, it is controlled by terrorists. PoK is actually a terrorist controlled part of Pakistan." pic.twitter.com/jS8lGVddJw

Interestingly, the FATF presidency is currently held by Xiangmin Liu of China, who said Pakistan "needs to do more and faster" to avoid being placed on a ''black list'' of countries that include Iran and North Korea by February 2020.

India has also raised the issue of targeting civilians during ceasefire violations along the Line of Control (LoC); these too have seen a spike since special status to J&K was scrapped in August, news agency PTI reported quoting Army sources.

According to PTI, in July, there were 296 cases of ceasefire violations, 307 in August and 292 in September, which also recorded 61 "calibre escalation", implying use of mortar and heavy ammunition. 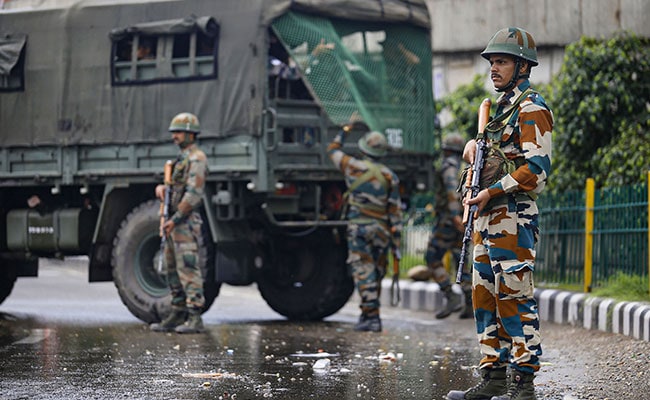 Pakistan has repeatedly - and unsuccessfully - tried to raise the Kashmir issue at global forums, including the United Nations, only to be turned away each time.

On Sunday General Rawat had said people "working behind the scenes", at the instance of terrorists, were making attempts at disrupting peace in Jammu and Kashmir. The Army chief said intelligence reports of terrorists crossing the border had increased since the centre scrapped special status to the state.

"Ever since the abrogation of special provisions (for Jammu and Kashmir), we are getting repeated inputs about infiltration by terrorists from across the border," he explained.

General Rawat's remarks are similar to those made by Rajnath Singh, who, on Monday, said Indian forces would "keep giving befitting reply until they (Pakistan) stop such activities".

On October 20 the Army launched artillery attacks on terror camps located inside PoK, destroying three camps and killing at least six Pakistan soldiers. The strike was in retaliation to support provided by the Pakistan Army to push terrorists into India.

General Rawat on Friday warned Pakistan that India considered the "complete state of Jammu and Kashmir" and would be satisfied with nothing else.