German Chancellor Angela Merkel will be holding talks with PM Narendra Modi on a host of bilateral issues and nearly 20 agreements are expected to signed between the two countries, sources said. 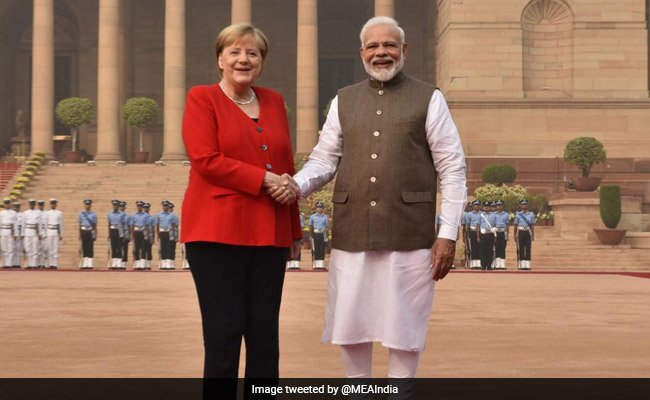 A number of agreements will be signed between India and Germany signifying their broad-based ties and the "very close" relationship between the two countries, German Chancellor Angela Merkel said today.

She made the remarks after being received by Prime Minister Narendra Modi at the Rashtrapati Bhavan where she was accorded a ceremonial welcome after arriving in India on Thursday night on a three-day visit.

Speaking to reporters, Chancellor Merkel said she was delighted to be in India for the fifth Inter-Governmental Consultations.

"I would like to thank the Prime Minister for the very warm and gracious welcome with which we have been received here. This is my fourth visit to India and I look forward to the very interesting programme," she said.

"Germany-India are linked by very close ties. We will have discussions on issues of mutual interest. We also have the opportunity of signing a number of MoUs and agreements that shows that we have a very broad-based and deep relationship," Chancellor Merkel said.

Germany and India have been cooperating for many years and will build on this cooperation in future, she said. "This is a very close relationship. We have great respect for this vast country and its diversity," she added.

Chancellor Merkel then paid tributes to Mahatma Gandhi at Rajghat.

She then co-chaired the fifth IGC with Prime Minister Narendra Modi, following which the two leaders will make press statements and a raft of agreements will be signed between the two countries.

Chancellor Merkel will be holding talks with PM Modi on a host of bilateral issues and nearly 20 agreements are expected to signed between the two countries, sources told news agency Press Trust of India.

She will also call on President Ram Nath Kovind in the evening and will hold another meeting with PM Modi at Lok Kalyan Marg.

On Saturday, the German leader will meet a business delegation and visit Continental Automotive Components India Pvt Ltd in Manesar near Gurgaon.

Ahead of the visit, German envoy to India Walter J Lindner had said PM Modi and Chancellor Merkel have a "very good relationship and they can talk about any issue. I do not want to anticipate what the two leaders will be talking about". He was responding to a question on whether the Kashmir issue will be discussed between them.