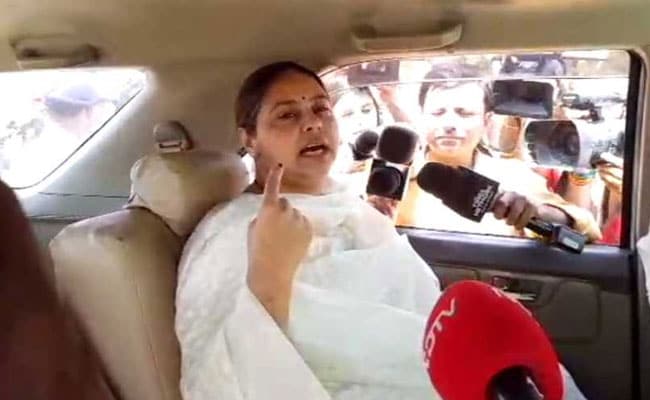 Rashtriya Janata Dal (RJD) leader Misa Bharti cast her vote today and said she was "200 per cent confident" of the 'mahagathbandhan' alliance securing a majority in Bihar in the ongoing Lok Sabha election and that "the people of Bihar are always in our thoughts".

The sister of RJD leader Tej Pratap Yadav, Misa Bharti also hit out at the Janata Dal (United) government in the state and the BJP-led National Democratic Alliance at the centre for cheating the people out of development.

She also said, "We are raising issues concerning the people while the NDA alliance has not. If you go to Patna and observe the state of the roads and electricity, you'll know what development has taken place."

"Everybody is in the favor of 'mahagathbandhan'. I believe that now Modi will go and good days of the people will come," she added.

Misa Bharti is contesting the election from the Pataliputra constituency, where she faces sitting parliamentarian (and former RJD leader) Ram Kripal Yadav of the BJP. She fought from the same seat in the last election, losing by only 40,000 votes.

She will look to the Yadav caste, to which both she and her rival belong, for votes, with her campaign almost entirely focused on her ailing father, former Chief Minister Lalu Prasad Yadav, who is serving sentences in fodder scam cases and has not been able to secure bail, even on health grounds.

The RJD leader also criticised Prime Minister Narendra Modi for his trip to Kedarnath yesterday, saying that while he may have gone to seek the blessings of god, he should have been among the people on voting day.

As many as eight Lok Sabha constituencies in Bihar vote today in the seventh and final phase of polling. Election results will be declared on May 23.