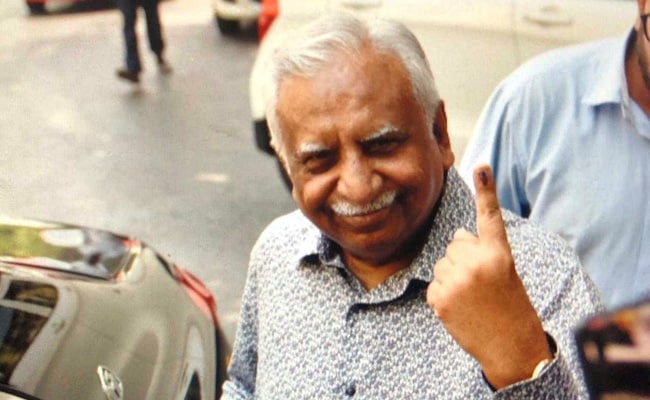 Naresh Goyal, founder of the recently grounded Jet Airways, came out to cast his vote in Mumbai on Monday in the fourth phase of the national election. This was Naresh Goyal's first public appearance since the airline stopped its operations indefinitely because of its colossal debt, leaving thousands of employees without a job overnight.

Mr Goyal, who arrived to vote in a Mercedes Maybach, was seen flashing his inked index finger before the media outside the polling booth in south Mumbai's Villa Theresa Convent. This is the same polling station where industrialist Mukesh Ambani is voting. Mumbai's six parliamentary constituencies are voting in the fourth round of the national election.

The 69-year-old did not respond to questions on the state of the airline he founded 27 years ago.

On March 25, Mr Goyal and wife Anita resigned from the board of the airline they founded in 1992.

The airline was under a Rs. 8,000-crore debt and was struggling to stay afloat. Until recently, the airline was the second largest carrier in India by market share.

The cash-strapped airline, that was struggling with grounded fleet and mounting dues to banks, suppliers, employees and lessors, suspended its operations earlier this month.

The crisis has put 20,000 jobs at stake and has left many of them seeking jobs at other airlines with pay cuts. Many worried Jet Airways employees held demonstrations in Mumbai and Delhi, appealing  the government to intervene for revival of the company.

After flying for 25 years, Jet Airways announced temporary grounding of operations after its lenders declined a Rs 900-crore lifeline.

The last Jet Airways flight flew on April 18 from Amritsar to Mumbai before the curtain was drawn for India's oldest private airline.