Last year, Governor's Rule was imposed in the state on June 19 after the ruling alliance between the BJP and Mehbooba Mufti fell apart. 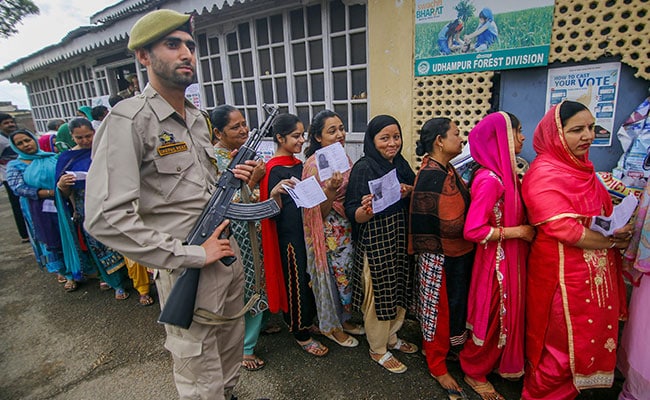 General elections 2019: There were expectations of simultaneous polls in Jammu and Kashmir.

Assembly polls in Jammu Kashmir is not likely to be held before November, indicated sources in the home ministry. The Election Commission, they said, has asked for a second opinion on extending President's Rule in the state beyond July. Legal opinion has been sought as the Constitution is silent on what might happen if the new government does not wish to extend President's Rule, said a senior ministry official.

"After May 23, what if the new government does not want to impose President's Rule and holds the Election Commission responsible for not conducting elections," a senior official said .

The Commission, he indicated, does not wish to have the onus on itself and so its officials have sought legal opinion, he added.

Its six-month term ends in July and on July 2, it needs to be extended.

Home ministry officials said after Lok Sabha election results come out on May 23 and the termination of President's Rule, there will be a 15-day period. This would be from June 5 to June 20 - between the end of Ramzan and the beginning of Amarnath Yatra.

"As it is very short for a six or seven phase election, we are also of the opinion that elections can't be held now. So we have decided to tell the Election Commission to postpone it till November," the official said.

"So President's Rule in the state needs to be extended before July 2. The new government should be in place before that to deal with the formalities including moving a Cabinet note and getting the President's assent to extend President's Rule," adds a senior functionary of the Ministry.

There were expectations in Jammu and Kashmir that assembly election would be held simultaneously with the Lok Sabha polls. But the Election Commission had negated it, citing security concerns of the state government.

In a first, the Lok Sabha election in one constituency, Anantnag, is being held over three phases.

All political parties in the state have upset over the decision. The Centre, most said, was deliberately holding up the democratic process in the state, they said.

Some of the bureaucrats in Delhi also expressed reservations, saying it could be another tactic of the Centre to stall the assembly polls. The BJP-led government, an officer said, wants to wait for the results of the national elections.

This is not the first time that President's Rule is going to be extended in Jammu and Kashmir.

In March 1990, then Governor Jagmohan had dissolved the assembly and for the next 6 years President's Rule was in place in the state.

Assembly elections were held in October 1996.