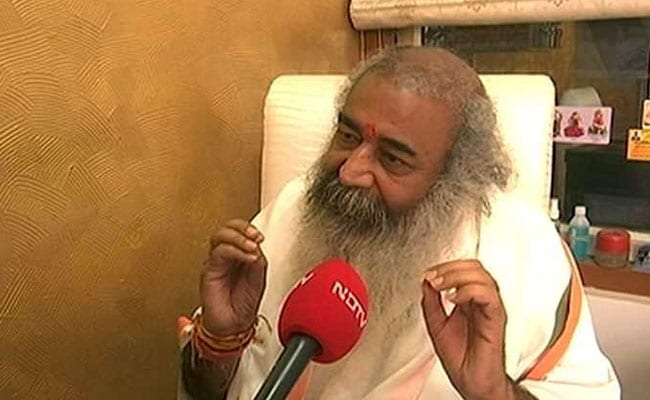 The prestigious Lucknow seat features a high-profile three-way battle between Mr Singh, Ms Sinha and Acharya Krishnan. The constituency voted today, along with 13 other seats, during the fifth phase of the 2019 general election, whose results are expected on May 23.

Speaking to NDTV, Acharya Krishnan said, "Look, Poonam Sinha and Rajnath Singh-ji are fighting these elections together. Absolutely. This is because Poonam Sinha is also a member of RSS. Till today. They are working to cut Congress votes when everyone knows this election is about BJP and Congress".

The Samajwadi Party joined hands with arch-rival Bahujan Samaj Party (BSP), led by Mayawati, in March to combat the BJP in this election. Mayawati had earlier appealed to all 'gathbandhan' workers in the state to vote for Congress candidates Rahul and Sonia Gandhi, in Amethi and Rae Bareli, and weaken BJP-RSS forces.

Acharya Krishnan, whose name was included in a list of "fake godmen" issued last year by the Akhil Bhartiya Akhara Parishad (ABVP) contested the 2014 Lok Sabha polls from Sambhal in Uttar Pradesh.

He was quoted in an IANS report as saying he was keen to challenge a top BJP leader in these elections because the party had failed to keep its promises.

He pointed to links between the BJP and Ms Sinha's husband - actor-turned politician Shatrughan Sinha - as evidence of collusion, saying "Poonam Sinha's whole family, till now, was with BJP. So why did Akhilesh (Yadav, the Samajwadi Party chief) give her a ticket?"

Ms Sinha is making her debut in politics this election but her husband was a two-term parliamentarian from the Patna Sahib seat in Bihar, with the BJP before switching to the Congress in April.

Lucknow has been with the BJP since 1991. The party's iconic leader Atal Bihari Vajpayee held it from 1991 to 2009 and Rajnath Singh, who won the 2004 Lok Sabha polls from western Uttar Pradesh's Ghaziabad, took it over in 2014. Mr Singh won against Rita Bahuguna Joshi of the Congress, who is now with the BJP. She came second, getting only half of the BJP leader's 5.6 lakh votes.

"Samajwadi Party made her a candidate. But now I want to say to Mayawati and Akhilesh... did they hear Mulayam Singh Yadav (the Samajwadi Party co-founder) say in Parliament that we want to make Modi prime minister?" Acharya Krishnan said. The Congress leader was referring to comments made by Mr Yadav in February, when, during the last session of the current Lok Sabha, he offered PM Modi his congratulations and wished he would become prime minister again.

He also dismissed suggestions Mrs Sinha's candidature could help the Congress because votes would be split between the BJP and the Samajwadi Party.

"Everybody knows Mayawati and Akhilesh are working to elect Modi-ji and Rajnath-ji. They are cutting Congress votes when everyone knows the Congress and the BJP are in a nationwide battle to form the next government", he said.