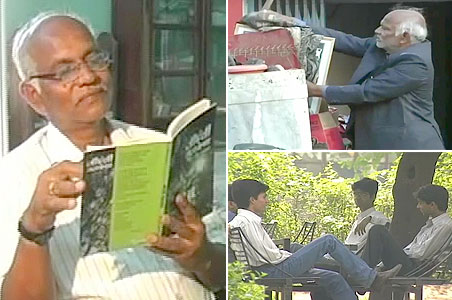 Aligarh: Dr Sreenivas Siras, a Marathi professor at Aligarh Muslim University (AMU) sacked for being gay, was found dead on Wednesday evening. He is suspected to have committed suicide.

Siras, 64, was suspended by the conservative institution after secretly shot videotape surfaced, showing him having sex with a rickshaw puller. Last week, the Allahabad High Court had stayed the suspension ordered his reinstatement.

"Now, I can go back to my beloved university," Siras had said to NDTV, after the court ordered AMU to not just take him back, but provide him accommodation till he retires later this year. (Read & Watch: Back to my beloved AMU, says relieved Siras)

Promoted
Listen to the latest songs, only on JioSaavn.com
Last year the Delhi High Court decriminalised homosexuality. But the conservative institution had accused Dr Siras of grave misconduct. The controversy had re-ignited the homosexuality debate on the university's campus and both students and teachers stood divided. (Read: Gay debate at Aligarh Muslim University)

"I spent two decades here. I love my University. I have always loved it and will continue to do so no matter what. But I wonder if they have stopped loving me because I am gay," Professor Siras had said after the incident first made headlines.
Comments
Gay ProfessorAMUsuspected suicideDr Sreenivas Siras