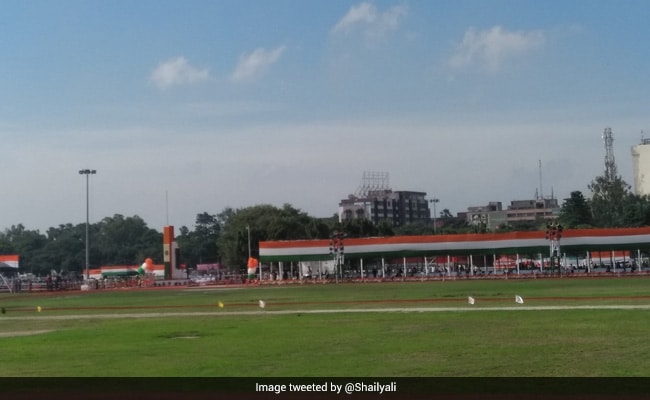 Patna's Bankipore Maidan, silent witness to some of the landmark events in the country's history, was renamed in the honour of Mahatma Gandhi after his assassination and before the first anniversary of Independence Day in 1948.

According to archival documents, the sprawling oval-shaped ground, now famously known as ''Gandhi Maidan'' which has been the venue of I-Day celebrations in the state since independence, was earlier called ''Bankipore Maidan'' or ''Patna Lawn''.

According to the rare private collection of the Jalan family of the legendary Quila House, the name Gandhi Maidan was used in the official invitation cards printed for the celebrations of the first anniversary of India's independence on August 15, 1948.

Aditya Jalan, 43, the current scion of the family, said he accidentally found a rare I-Day invitation card addressed to his great grandfather Dewan Bahadur Radha Krishna Jalan, while going through his family archives.

"Gandhiji was assassinated on January 30, 1948 and the first anniversary of I-Day was on August 15 the same year. While going through our huge family archives, I came across two different invitation cards, one from 1945 which mentions the venue as ''Bankipore Maidan'', while the other from 1948, which says ''Gandhi Maidan,'' Mr Jalan told PTI.

This indicates that the iconic ground was known as Bankipore Maidan during British rule and was rechristened before the first I-Day celebrations that year, he said.

The invitation issued by the Patna administration has embossed letters and reads, "The District Magistrate, Patna requests the pleasure of Dewan Bahadur Radha Krishna Jalan's presence at Gandhi Maidan, Bankipore on Sunday the 15th Aug at 9 am when H.E. the Governor of Bihar will perform the flag-hoisting ceremony and take the salute from a combined military, police and home-guard parade on the occasion of the first anniversary of Independence Day".

According to a senior official of the Bihar State Archives, the request to rename the ground as Gandhi Maidan was made by a school teacher from Muzaffarpur in north Bihar, soon after his assassination.

"As per the records in our archives, a teacher from Muzaffarpur district had sent a letter to the government authorities, requesting to rename the Bankipore Maidan in honour of Gandhi who had been martyred in January 1948. He had suggested to use Gandhi lawn, Gandhi Park, or Mahatma Gandhi Maidan and various other combinations, but insisted it carried Bapu''s name," the official told PTI.

Radha Krishna Jalan, a well-known and well-travelled businessman, was also a passionate collector and his private collection formed the Jalan Museum, one of the largest house museums in Asia endowed with some of the rarest artefacts, including a four poster bed of Napoleon III and a dinner set of King George III.

He was also an archivist and collected invitation cards, pamphlets and other objects very meticulously, which today are "like rare gems", his great grandson said.

"The rare archives, which I am arranging now, is not only helping us tell the story of our family but also of Patna and of Bihar. We are planning to share such rare snippets in a story format on a new Facebook page we are launching on August 15 called ''Planet Patna Patter'', said Mr Jalan, a businessman.

In an invite dated February 18, 1945, issued in the name of his grandfather Hiralal Jalan, the ground has been mentioned as ''Bankipore Maidan''. The invite was from the District Soldiers, Sailors & Airmen''s Board, Patna.

During the colonial period, the Bankipore Maidan hosted many key events including the royal durbar of the then Prince of Wales Edward VIII in 1921 during his Patna visit, many major exhibitions, and has been a witness to Gandhi's prayer meetings as well as speeches delivered by Subhas Chandra Bose and other freedom fighters.

In December 1938, the Bankiore Maidan hosted Muhammad Ali Jinnah, whose fiery speech against Congress at the 26th Annual Session of the All-India Muslim League had lifted the fortunes of his Muslim League party.

Post-independence, it has been the nerve centre of political rallies and the voice of socialist leader Jayaprakash Narayan or ''JP'' boomed there during the ''Total Revolution'' or ''Sampoorna Kranti'' movement in 1974.

It is also the preferred venue for hosting many cultural events and state programmes including Bihar Diwas and hoisting of the tricolour on Independence Day and Republic Day.

The Maidan was developed by then Patna Commissioner Metcalfe in the early decades of 19th century. It was previously also used as a race course during the British time.

Jalan said the residents of old Patna still refer to Patna as Bankipore, the city''s civil station established by the British, adding, the over 150-year-old Bankipore Club near the Maidan is still called so.

Many old-timers refer to the Maidan as ''Lawn'' and an old mosque near the verdant ground still uses the name ''Lawn ki Masjid''.