Game Of Thrones 7 Trailer: The Great War Is Here And Its Preview Is Epic

Game Of Thrones 7 Trailer: Jon Snow declares that the "great war is here." Daenerys Targaryen is all set to attack King's Landing with her mammoth army and three dragons and Cersei Lannister is prepared. Jon Snow will fight two enemies 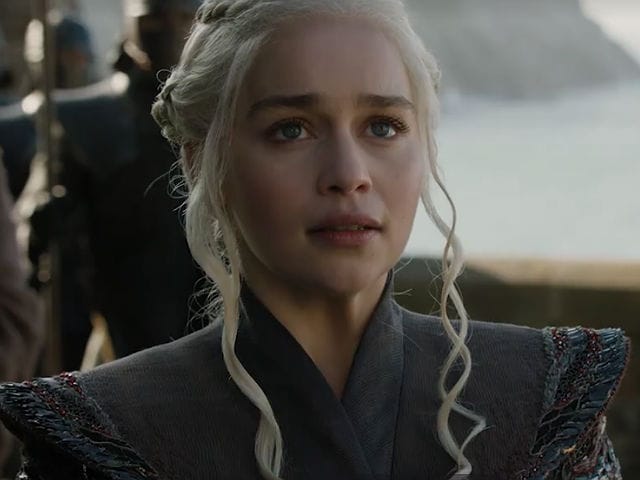 Emilia Clarke as Daenerys Targaryen in Game Of Thrones 7.

New Delhi: Game Of Thrones season 7 trailer is finally here and nothing's left to imagination. Yes, there will be an epic battle for the Iron Throne. Daenerys Targaryen believes she was born to rule the Seven Kingdoms and so does her nemesis Cersei Lannister, who knows that she has enemies in all direction and is all set to defeat them; PS: her twin and lover Jamie Lannister is by her side. Petyr Baelish aka Littlefinger is fiddling with Sansa Stark's mind while Jon Snow is gearing up for a battle with two enemies - the Lannisters in the south and the White Walkers from the far north.

Daenerys Targaryen's army is now pretty massive and her three dragons are now fully grown are participating in the battle with their 'mother.' We get a glimpse of Tyrion Lannister, Hand to Queen Daenerys, inspecting the battleground.

Davos Seaworth can be seen counselling one of his own saying, "If we do not put aside our enmities and band together, we will die. And then it doesn't matter whose skeleton sits on the Iron throne." This may be a hint towards a possible allegiance between Jon Snow and Daenerys Targaryen's army. Towards the end of season 6, Bran Stark's vision revealed that Jon Snow is Daenerys' nephew - He was born to Eddard Stark's sister Lyanna and Daenerys' brother Rhaegar Targaryen. Jon Snow was raised as Eddard Stark's illegitimate son to save him from Robert Baratheon's (Lyanna's lover) wrath.

Meanwhile, Arya Stark's seas journey is over and she is now alone on the land looking for her other enemies to cross off from her bucket list after killing Lord Walder Frey and his sons in the last season.

Promoted
Listen to the latest songs, only on JioSaavn.com
Watch the trailer of Game Of Thrones 7: