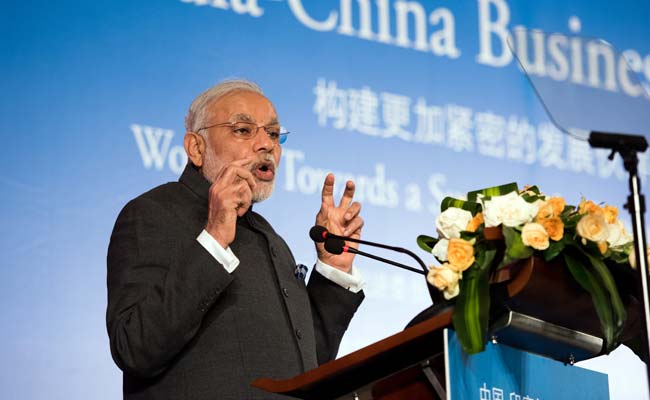 Shanghai: Prime Minister Narendra Modi met 22 top Chinese CEOs in Shanghai today, where he pitched his "Make in India" agenda to them. 21 business agreements worth 22 billion dollars were signed between Indian and Chinese companies. He also addressed the business leaders after the meeting.

Here is the full text of Prime Minister Modi's speech:

I am really happy to be here with you. Before coming to this forum, I had very detailed discussion with the CEOs of major Chinese companies. I am sure our interactions today will lead to benefits to the people and businesses of the two countries.

Alongwith me a number of officials and prominent Indian CEOs are also present here.

As you know, China and India are two great and old civilisations of the world. They have provided many lights of knowledge on the entire human society. Today, we together, represent more than one third of the Global population.

India and China have a common History of Five Thousand Years and a common Boundary of over Three Thousand and four hundred kilometers.

Two thousand years ago, at the invitation of the Chinese Emperor Ming, two Indian monks came to China. They brought many Sanskrit scriptures on two white horses. They translated many Buddhist classics and scriptures into Chinese language.

It is believed that they introduced Buddhism in China. The king built a temple in honour of this event. The temple is popularly known as White Horse Temple. The temple then increased in importance as Buddhism grew within China, and spread to Korea, Japan and Vietnam.

The serenity of Buddhism in Asian countries is the seed of their success. I strongly believe that this century belongs to Asia. And Buddhism will be a further unifying and catalysing force among the Asian countries.

Your famous scholars like Fa Hien and Hiuen Tsang have taught many secrets of Chinese wisdom to Indians. In addition, they discovered many secrets within India itself. Hiuen Tsang had visited my own home town in Gujarat. From his works, we know today that there was a Buddhist Monastery there. When Hiuen Tsang returned to China he brought with him Sanskrit scriptures and books of wisdom. The traditional systems of medicine of the two countries based on natural elements also have a lot in common.

In recent times too, this stream of knowledge is flowing across our borders. Prof. Ji Xianlin of Peking University was a great Sanskrit scholar. He spent most part of his life in translating Valmiki's Ramayan into Chinese. Indian government has honoured him by bestowing a prestigious Award in 2008.

More recently, Prof. Jin Ding Han has translated Tulasi Ramayan into Chinese. Translations of Bhagwad Gita and Mahabharat are also popular with the Chinese people. I thank these Chinese scholars for introducing Indian culture to the Chinese people.

Friends! India has always been a knowledge society. Whereas, you have been an innovating society. Ancient China was highly advanced in Science and Technology. Like Indians, Chinese too sailed to Americas and distant corners of the world in their ships. They had the Mariners' Compass and Gun Powder.

But I must add that during this time, Indian astronomy and mathematics were quite popular in China. Indian astronomers were appointed on the official boards set up to prepare calendars.

The Indian concept of Zero and that of nine planets have been helpful in discoveries in China. So, our ideas had a role to play in your innovations.

Thus, we have a lot in common and we can do a lot together. As we helped each other growing spiritually, we have to help each other growing economically. There are instances of such economic exchanges in the past. It is believed that China gave silk and Paper to India. We both have potentials of growth and problems of poverty which we can tackle together. I am personally committed to take the co-operative process forward.

That is why even as Chief Minister of Gujarat, I visited China. As Prime Minister too I am convinced and committed for exchange and co-operation for socio-economic development of the two countries.

I have lot of hope from the relationship which I and President Xi are trying to build. During his visit to India in September 2014, Chinese investments worth 20 billion US Dollars (Rs. 12 lakh-crore) were committed. We signed 12 agreements covering industrial parks, railways, credit and leasing, with cumulative amount of investments of 13 billion US Dollars.

We are very keen to develop the sectors where China is strong. We need your involvement. The scope and potential, the breadth and length of infrastructure and related developments is very huge in India. Just to give you some examples:

- We have planned to build 50 million houses by 2022. In addition, we are going to develop smart cities and mega industrial corridors;

- For this purpose, we have refined our FDI Policy in construction. We are also coming up with a regulatory framework for this sector;

- We have targeted 175 Giga Watts of renewable energy in next few years. In addition to generation, the issues of transmission and distribution of electricity are equally important for us;

- We are modernizing our Railway systems including signals, engines and railway stations. We are planning metro rail in fifty cities and high speed trains in various corridors;

- Similar is the case with Highways which we want to build in faster way;

- We are putting up new ports and modernizing the old ones through an ambitious plan called Sagarmala;

- Similar focus is on upgrading the existing Airports and putting up regional airports to enhance connectivity to places of economic and tourist importance;

- In financial services too, we are moving towards a more inclusive and faster delivery of financial products including bank loans and insurance;

- For this purpose we opened 140 million bank accounts; increased FDI in insurance upto 49% and have set up MUDRA Bank to fund the micro-businesses;

- Recently, I have launched innovative schemes for insurance and pension to enhance social security of our citizens.

In March this year, I had a discussion with Jack Ma of Alibaba in Delhi about possible co-operation for strengthening this micro-credit sector of India.

As you have successfully done, we also want to promote manufacturing in a big way particularly to create jobs for our youth who form 65% of our population.

Hence, we want to Make things in India. For this purpose, we have launched a campaign called "Make in India". It is also the effort of my Government to encourage innovation, R&D and entrepreneurship in the country. In this year's budget, we have set up some innovative institutional mechanisms for that purpose.

We have to learn from you about the development of labor-intensive industries, creating conditions for sustainable foreign direct investment, skill development, infrastructure creation and export-led development model.

All this is a historic opportunity for the Chinese companies. You would already be knowing the direction of my Government and the steps we are taking. We have committed ourselves for creating and improving the business environment. I can assure you that once you decide to be in India, we are confident to make you more and more comfortable.

Many Chinese companies have the possibility of investing in India to take advantage of India's potentials. The potential lies in Manufacturing, processing as well as in infrastructure.

I am here to assure you that India's economic environment has changed. Our regulatory regime is much more transparent, responsive and stable. We are taking a long-term and futuristic view on the issues. Lot of efforts have been made and are still underway to improve the 'Ease of Doing Business'. We do believe that FDI is important and it will not come in the country without a globally competitive business environment. Therefore, we have rationalized a number of issues which were bothering the investors.

- We are making the taxation system transparent, stable and predictable.

- We have removed lot of regressive taxation regimes. In our very first Budget, we said we will not resort to retrospective taxation.

- We are reducing the complicated procedures, making them available at one platform, preferably online;

- Simplifying the forms and formats has been taken up on war footing.

- Definite mechanisms for hand holding have been set up in the form of hub and spoke model. Invest India is the nodal agency for this purpose.

- In this year's budget, we allowed Tax pass through for AIFs, rationalization of capital gains of REITs, modification in PE norms and deferring the implementation of GAAR for two years.

- We have fast tracked approvals in industry and infrastructure. This includes environmental clearances, extending the industrial licences, delicencing of defence items, and simplification of cross-border trade.

- Within a very short time, we introduced GST Bill in parliament.

Similarly, for infrastructure development, we have taken some far reaching steps.

- First of all we have made an all-time high allocation for Roads and railways sectors.

- In addition, we are setting up India Infrastructure Investment Fund.

- We have also allowed Tax free Bonds in the Infrastructure sector including roads and railways.

We know that a lot more has to be done. But we are committed to take this process forward. We are constantly working to improve the business environment further.

However, our initial measures have helped in building up an enhanced investor confidence. The sentiments for private investment and inflow of foreign investment are positive. FDI inflows have gone up by 39% during April-2014 and February-2015 against the same period in previous year;

Our growth rate is above 7%. Most of the international financial institutions including the World Bank, IMF, OECD and others are predicting even faster growth and even better in the coming years. MOODY's have recently upgraded the rating of India as positive on account of our concrete steps in various economic fields.

Friends! Indo-Chinese partnership should and will flourish. I expect very good outcome from this coming together. We have complemented each other in the past. We can complement in the present and future too. As two major economies in Asia, the harmonious partnership between India and China is essential for economic development and political stability of the continent. You are the 'factory of the world'. Whereas, we are the 'Back office of the world'. You give thrust on production of hardware, while India focuses on software and services.

Similarly, Indian component manufacturers have been masters in high-quality precision and the Chinese players have mastered the art of mass production. The component design expertise of Indian engineers and low cost mass production by China can cater to the global markets in a better way. This industrial partnership of China and India can bring about greater investment, employment and satisfaction of our people.

Friends! Let us work together in mutual interest and for progress and prosperity of our great countries.

I would conclude by saying that now India is ready for business. You must be sensing the winds of change in India. I only advise to you to come and feel the same.

Promoted
Listen to the latest songs, only on JioSaavn.com
I assure you of my personal attention for your success.

Thank you very much.