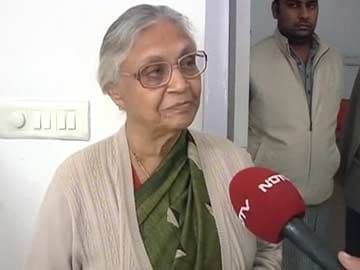 New Delhi: Former Delhi chief minister Sheila Dikshit on Monday gave her "best wishes" to the Aam Aadmi Party (AAP) and asked the party to fulfill the promises it made to the people.

"Our best wishes to them to fulfil their promises. We gave outside support to them to form (a) government and will continue to give support till they fulfill the promises," Ms Dikshit told the media.

Her comments came as Aam Aadmi Party leader Arvind Kejriwal announced his party will form the government in Delhi.

The AAP won 28 seats in the 70-member assembly and is taking power with the support of eight Congress legislators.

"We know the promises (they made) are difficult to fulfill," said Ms Dikshit, who was defeated by Mr Kejriwal in her New Delhi constituency by over 25,000 votes.
Comments
Sheila DikshitArvind Kejriwal