The BJP's infographic sought to explain that in percentage, the fuel price hike on its watch is far less than that when the UPA was in power. 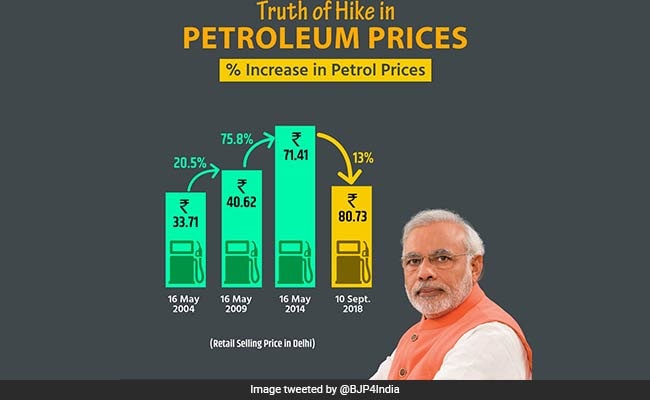 Fuel price hike: Not many were less than amused by the political sparring on Twitter.

The ruling BJP has been trolled relentlessly by the Congress, and a few others, after tweeting a graphic "explaining" how, despite the fuel price hike, its government did better than the previous Manmohan Singh regime.

The BJP's infographic sought to explain that in percentage, the hike in fuel prices on its watch is far less than that when the Congress-led UPA government was in power. The party ended up receiving advice to get lessons in math and graphic design.

Amit Malviya, the chief of the BJP's IT cell, said the graphic was not being interpreted correctly and was aimed only at showing that the 13 per cent increase since 2014 was lower than in previous years. But in demonstrating that the rate of increase has dropped, the BJP's bar at Rs 80.73 is shorter than the Congress's at Rs 71.41. The post was soon troll-bait on social media.

For some, the short response to the graph could be summed up with a - "Huh?"

Self goal tweet? Am sorry. I didn't understand this graph. Can u please explain why the yellow bar is smaller in size despite value being higher?! https://t.co/8pOHmHXM0f

When you have to hide a 343% increase in taxes, but don't know how.

Even we couldn't resist retweeting this ;) https://t.co/ulDKp17sVy

The line - "Even we couldn't resist retweeting this" - was inspired by the dig taken by the BJP when the Congress had tweeted a post of Rahul Gandhi's photos in Germany, captioned: "The many facets of Rahul Gandhi".

Then the Congress put out what it called a "fixed" version of the GFX.

There! Fixed it for you @BJP4India#MehangiPadiModiSarkarpic.twitter.com/kbKBjUi0M7

And the party could not stop.

The government is facing criticism that it is not doing enough to cut fuel taxes that account for more than a third of retail petrol and diesel prices. As fuel prices continued to shoot up, many were less than amused by the political sparring on Twitter.