To keep up the legacy of 'The Common Man', the iconic creation of R K Laxman, his grand-daughter has come out with new cartoon characters, 'New Common Man' and 'The Common Woman'. 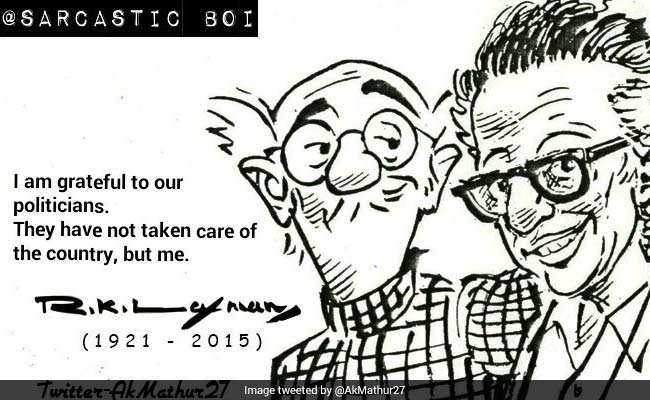 Mumbai: To keep up the legacy of 'The Common Man', the iconic creation of R K Laxman, his grand-daughter has come out with new cartoon characters, 'New Common Man' and 'The Common Woman'.

Rimanika Laxman, who grew up watching her grandfather working wonders with his brush strokes, made the announcement on the World Cartoonist Day today.

"Rimanika has been very keen to create a concept of a Common Woman. Her grandfather had encouraged her to carry it forward. She has already started making a conscious effort to develop the Common Woman's role," said a statement from RK IPR Management, a company founded by the late R K Laxman.

"The concept that she has in mind is the grand-daughter of the 'Common Man', who has also been observing and facing similar situations, not pertaining to problems related to woman only, but in general," it said.

"These new cartoons are likely to come up within a month. We are approaching several newspapers and also electronic media to publish these cartoons," said Usha Laxman, R K Laxman's daughter-in-law.

Promoted
Listen to the latest songs, only on JioSaavn.com
Laxman's Common Man was a mute but omnipresent spectator who watched the ironies and pathos of life in the post-Independence India. The cartoons featuring the Common Man became extremely popular and the character achieved an iconic status.

Bengal Wants Mamata Banerjee To Get Some Rest, BJP To Serve: JP Nadda