Locals staged an impromptu road block while some set fire to around 10 trucks after the accident. 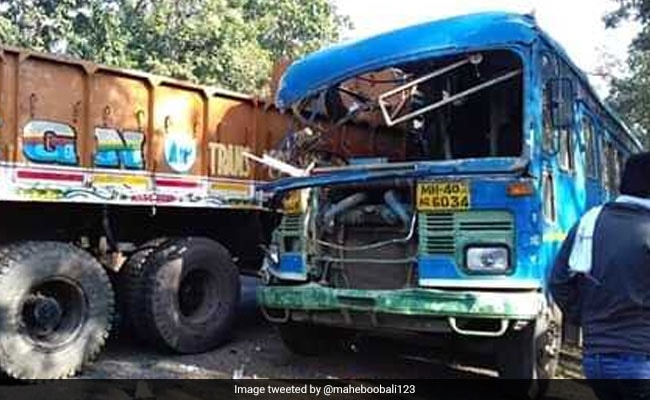 A state transport bus and a truck collided in Gadchiroli, Maharashtra, today.

Four people, including school students, were killed and 10 others have been injured today after a state transport bus and a truck collided in Gadchiroli, Maharashtra, the police said.

A mob of relatives of the victims and locals torched around 10 trucks, mostly belonging to a local mining company, said Gadchiroli Police Superintendent Shailesh Balakawade.

"We rushed additional police personnel to the region to pacify the crowd and the situation is now fully under control," he said.

The incident happened around 8am when the passenger state transport bus departed from the Aheri depot, bound for Alapalli, carrying more than 50 passengers including many school students.

As it sped towards a turn near Gurupalli, a mining company's truck suddenly came from the opposite direction and rammed into the bus.

Locals reached the scene of the tragedy and recovered four bodies which included students, a forest department employee and a woman official.

They were soon joined by other people from nearby villages who staged an impromptu road block while some set fire to the trucks.

The injured were rushed to nearby hospitals for treatment.

The police are maintaining security measures on all the roads in the vicinity of the accident as a precautionary measure.