Anant Deo -- a Deputy Inspector General with the STF -- was the police chief in Kanpur three months ago. 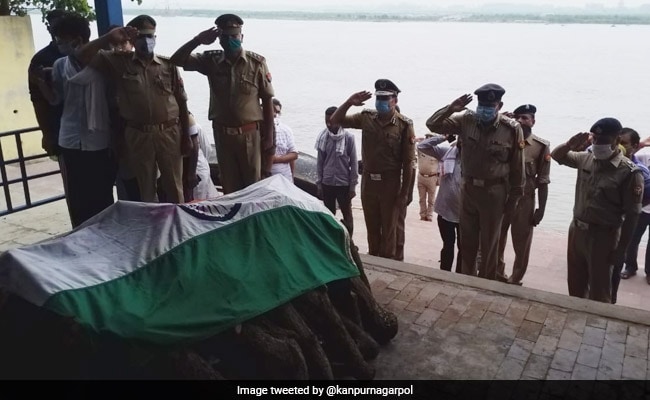 Devendra Mishra was killed in line of duty in an encounter.

Anant Deo, a former chief of the Kanpur police who allegedly ignored a letter from a junior officer complaining about the nexus between policemen and notorious criminal Vikas Dubey, has been transferred by the Uttar Pradesh government. Mr Deo, who is a Deputy Inspector General in the Special Task Force,  has been shifted to the Provincial Armed Constabulary in Moradabad.

The state's move comes amid the churning in the police force in Kanpur following an ambush on Friday morning in which eight policemen died and six others were injured. Four policemen have been suspended over allegations that they leaked information to the criminal.

Mr Deo -- a Deputy Inspector General with the STF -- was the police chief in Kanpur three months ago and stayed till June-end when he was promoted as DIG and moved out to the of DIG-STF. His being the DIG-STF was seen as "a conflict of interest" as the STF is probing the Friday's massacre.

Mr Deo allegedly ignored a letter, supposedly written in March by Devendra Mishra, the Deputy Superintendent of Police who was murdered by Dubey and his men on Friday.

A copy of the letter is being widely circulated on social media. The police said they have no record of any such letter but a search is on for it.

In the letter, the officer had flagged that policemen, especially Vinay Tiwari, the Station Officer of Chaubeypur police station, were helping the gangster. The letter had also warned of a "big incident" if the complaint was ignored.

Vinay Tiwary, now suspended, is considered one of the policemen who leaked information to Vikas Dubey, leading to Friday's massacre. In the past, Vinay Tiwary had allegedly watered down a criminal case against Vikas Dubey. Sources said he had also refused to file an attempt to murder case that had triggered the police bid to catch him.

Devendra Misra, who took note of the complaint and filed a First Information Report against the gangster, also organized a team of 50, drawn from three police stations, to capture the gangster.
But they walked into a trap after information was leaked to Vikas Dubey.  Among others, two sub-inspectors and a constable of Chaubepur police station were killed.

Around 30 policemen of Chaubepur station are under the scanner. So far, four policemen, including Vinay Tiwari, have been suspended on charges of spying for the gangster. A case will be lodged against them, said Kanpur Senior Superintendent of Police Dinesh Kumar.

Vikas Dubey faces 60 criminal cases, including 20 cases of murder and attempt to murder and at least 19 cases of rioting. Despite a massive manhunt, the police have been unable to catch him.