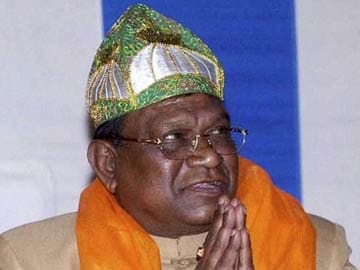 Hyderabad: Former BJP president and the first Dalit to head the party, Bangaru Laxman, died in Hyderabad today. He was 74.

Mr Laxman, who had been unwell for some time, died in a private hospital in Hyderabad at around 5 pm due to cardiac arrest. He is survived by his wife and former MP, Susheela Laxman Bangaru, son and three daughters.

Mr Laxman was removed as BJP president in 2001 when news portal Tehelka, through a sting operation, showed him taking Rs one lakh as bribe from undercover journalists in his chamber in the party headquarters to fix a fictitious deal to supply equipment to the Indian Army.

He was convicted under the Prevention of Corruption Act by a special CBI court and sentenced to four years in jail in April 2012. He was granted bail in October 2012 on health grounds. He had resigned from the BJP's national executive after the court verdict.

Born in a Dalit family in Andhra Pradesh, Bangaru Laxman joined politics at an early age and was elected to the Rajya Sabha in 1996.  He was president of the BJP between 2000 and 2001 and Union Minister of State for Railways between 1999 and 2000 during the Atal Bihari Vajpayee government.

"I am deeply saddened to hear the news of former BJP president Shri Bangaru Laxman's sudden demise. He dedicated his life serving the weaker sections of the society. My heartfelt condolences to his bereaved family," BJP president Rajnath Singh tweeted.

Promoted
Listen to the latest songs, only on JioSaavn.com
"Sad to know about Shri Bangaru Laxman's demise. May his soul rest in peace. Condolences to his family," BJP's prime ministerial candidate Narendra Modi tweeted.

Other leaders from across the political spectrum also condoled Mr Laxman's death.