Forgiving and wrongdoing should not be mixed: Graham Staines' wife 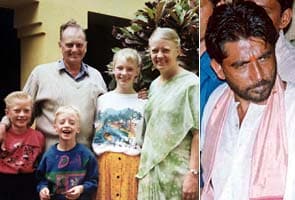 New Delhi: The Supreme Court on Friday upheld the life sentence for Dara Singh for killing Australian missionary Graham Staines and his two sons in Orissa in 1999. The Central Bureau of Investigation (CBI) wanted the death sentence for Singh, who was linked with Hindu right-wing group Bajrang Dal.

Reacting to the verdict, Graham Staines' wife Gladys Staines told NDTV that "forgiveness and the consequences of our wrongdoing should not be mixed up."

The Staines family was burnt alive in Keonjhar in 1999. Graham Staines had worked with leprosy patients in Orissa for 30 years. He was sleeping with his sons, aged 8 and 10, in a car on their way home on a cold January night when a mob in Manoharpur village poured petrol over their car and set fire to it. The Staines tried to escape, but a mob of about 50 people allegedly prevented them.

Promoted
Listen to the latest songs, only on JioSaavn.com
In 2003, a trial court in Khurda convicted all 13 accused. While Dara Singh was awarded the death sentence, the others were sentenced to life in prison. In 2005, the Orissa High Court commuted Singh's sentence to life. The High Court convicted Singh's accomplice Mahendra Hembram along with him, and acquitted 11 others.