India is not part of the Group of Seven wealthy democracies but was invited to the talks by Britain, which holds the rotating presidency of the group throughout 2021. 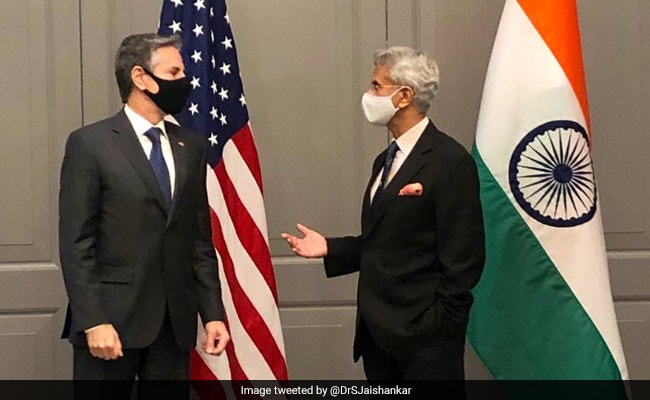 Foreign Minister Subrahmanyam Jaishankar, in Britain for G7 meetings, said on Wednesday he would hold his talks virtually after being exposed to possible coronavirus cases.

The foreign ministers of Britain, Canada, France, Germany, Italy, Japan and the United States are wrapping up three days of talks in London ahead of a G7 leaders' summit next month in Cornwall in southern England.

India is not part of the Group of Seven wealthy democracies but was invited to the talks by Britain, which holds the rotating presidency of the group throughout 2021.

"As a measure of abundant caution and also out of consideration for others, I decided to conduct my engagements in the virtual mode. That will be the case with the G7 Meeting today as well."

Sky News earlier reported there had been two positive cases among the Indian delegation.

A senior British diplomat said in a statement that "we deeply regret" S Jaishankar's absence for the in-person meeting on Wednesday.

"But this is exactly why we have put in place strict Covid protocols and daily testing."

S Jaishankar met US Secretary of State Antony Blinken in-person, with both wearing masks, on Monday evening on the sidelines of the foreign ministers summit.

The US State Department said it had been advised, including by public health professionals in Britain, that its health protocols "would permit us to continue with our G7 activities as planned".

"We have no reason to believe any of our delegation is at risk. We will continue to follow the guidance of public health professionals going forward and abide by the same strict Covid-19 protocols," spokesman Ned Price said.

India, the world's second-most populous nation, has been hit by a devastating wave of infections in recent weeks that has taken its total number of cases to more than 2.06 crore.

The massive spike -- which has badly hit major cities including the national capital Delhi and financial hub Mumbai -- has pushed the healthcare system to breaking point, overwhelming hospitals and leading to severe shortages of beds, oxygen and other critical medical supplies.

India on Wednesday reported more than 3,82,000 new infections and 3,780 deaths -- its highest number of fatalities yet in the pandemic.

The G7 was due to discuss coronavirus vaccines Wednesday amid growing pressure on the group to share stockpiles and know-how with poor nations.