Foreign media on sexual assault of children in India 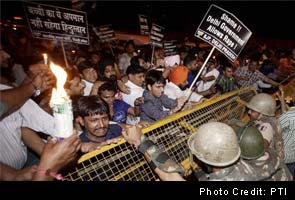 New Delhi: The case of a 5-year-old girl who was raped, tortured and nearly killed last week has shocked India, stirring memories of a gang rape on a medical student in December. Over the weekend as the girl was being treated at a hospital here, doctors tended to another child in a nearby bed.

In a message posted Saturday on her Twitter account after she visited the first girl in her hospital room, Sushma Swaraj, a senior leader of the Bharatiya Janata Party, said, "I saw another 5-year-old girl child in the next room. She is also a rape victim."

Swaraj then said doctors told her that they had recently discharged a boy who also had been sexually assaulted.

Angry protests and painful questions resurfaced over the weekend in India, just months after the death of the 23-year-old student who had been raped provoked a public outcry and demands for stricter laws against sex crimes and more protections for women.

After several men attacked the student in December, news reports were filled with stories about similarly heinous assaults on women, and India seemed to be experiencing an epidemic of gang rapes. On Sunday, newspapers contained reports from many parts of India about children as young as 4 being raped recently.

"These are only the tip of the iceberg as the large majority of child rape cases are not reported to the police while children regularly become victims of other forms of sexual assault, too," the report stated, adding that "sexual offenses against children in India have reached an epidemic proportion."

Rajan Bhagat, a police spokesman, said that the suspect arrested in the case of the 5-year-old tortured last week would appear in a New Delhi courtroom on Monday.

The suspect, Manoj, who uses just one name, lived in a ground-floor apartment in the same building as the family of the 5-year-old. According to interviews that he has given police officials and that have been reported in the Indian news media, he abducted the girl around 6 p.m. on Monday and then fled the apartment shortly after 7 p.m. because he feared he had killed her. He took a train to Bihar, where he was born and where his wife's parents reside. The girl's parents reported her missing on Monday, but they said that the police did not take their complaint seriously. The parents found her in the suspect's apartment on Wednesday after hearing her crying.

The parents said that the police offered them 2,000 rupees, or $37, to keep quiet about the case.

A doctor said Sunday that the girl was conscious, alert and talking to her parents. "She is out of danger," said Dr. D.K. Sharma, medical superintendent of the All India Institute of Medical Sciences. During the assault, candles and part of a bottle were inserted into her body; her doctors treated her for a blood infection and said that she would need further surgery.

One of the few studies to compare domestic violence rates in several countries found that Indian women reported far fewer assaults than women in other countries. But such surveys are difficult to conduct in India, where crowded conditions and multifamily housing make answering questions about sexual violence awkward and difficult.

Unlike the spontaneous eruption of anger in December, the demonstrations across New Delhi on Saturday and Sunday seemed far more deliberately political as protesters complained that the government and the police were not doing enough to prevent sexual crimes.

As they did on Saturday, hundreds of protesters stormed Police Headquarters in New Delhi on Sunday and demanded the resignation of the city's top police official. They also stood outside the large public hospital where the 5-year-old is being treated. Many of them were members of the Aam Aadmi Party, a nascent political movement led by Arvind Kejriwal, an anti-corruption advocate.

With national elections scheduled for next year, the governing coalition seemed keen to show that it was responding immediately to the public outcry. Three police officers have been suspended, two of them because of lapses in the initial investigation of the girl's disappearance and another because he was seen on television slapping a woman who was protesting at the hospital.

Sonia Gandhi, president of the Indian National Congress Party, released a statement insisting that the government focus on "actions not words" to stop rape.

On Sunday, Prime Minister Manmohan Singh said in a speech that more needed to be done to protect women and children. "It is widely accepted that, as a country, we have vast improvement to make in this vital area," he said.

Promoted
Listen to the latest songs, only on JioSaavn.com
In March, Parliament passed a law aimed at accelerating and improving the prosecution of rape cases, but the government has not tackled deep-seated problems hampering India's police forces, which are generally poorly trained, understaffed and highly politicized.