Opposition parties such as the National Conference and the People's Democratic Party have said no invitation was extended to them to meet the envoys. 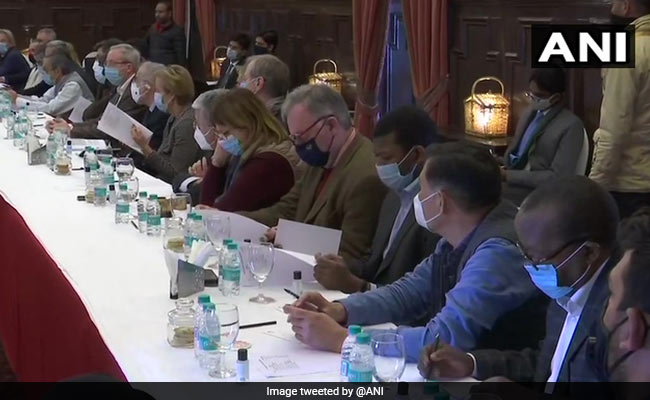 The envoys met up with students and some elected representatives in Budgam.

Envoys of 22 countries today began their two-day visit to Jammu And Kashmir amid heightened security and a shutdown in several parts of the Valley. This is the fourth such visit since the Centre scrapped the former state's special constitutional position and divided it into two Union Territories.

Diplomats of the European Union (EU) and other countries first drove to Magam town in Budgam district where, at a government-run degree college, they met some members of the District Development Council, students, and some elected village heads.

There, the local elected representatives praised the conduct of elections in a secure environment, according to an ANI report. They appealed to the delegation to extend cooperation to India and participate in the growth and development of Jammu and Kashmir, the report said.

At the venue, the envoys were given a rousing reception even though the town itself was completely shut down.

While no group had called for it, shops and business establishment remained closed in large parts of Srinagar where the diplomats were scheduled to meet officials, political leaders, civil society groups, journalists, traders, and people associated with tourism.

Among those visiting this time are ambassadors of the EU, Italy, France, Ireland, Sweden, Belgium, Brazil, Bangladesh, and Ghana. In January 2020, there was a pushback from the EU which chose not to send its representatives unless they were allowed to meet people freely and were not part of a "guided tour".

Ahead of the visit, at least half-a-dozen bunkers of security forces were removed in Srinagar. In the wake of the abrogation of Jammu And Kashmir's constitutional position, the state had witnessed a massive security build-up so as to foil any public show of resentment. Thousands of additional troops were deployed there to bolster the region's existing security cover.

Opposition parties such as the National Conference and the People's Democratic Party have, meanwhile, said no invitation was extended to their leaders to meet the envoys.