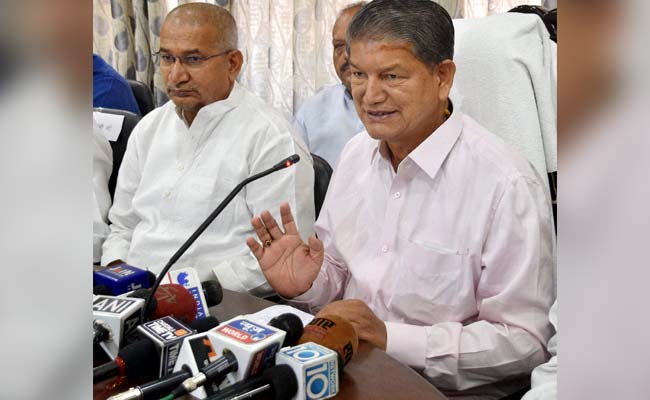 Uttarakhand was placed under President's Rule by the Centre in March, a day before Harish Rawat was to take a trust vote to prove his majority.

New Delhi: Harish Rawat of the Congress will seek a vote of confidence in the Uttarakhand assembly on Tuesday, May 10, to prove that he has a majority in the House, the Supreme Court has ruled.

The court also said that nine rebel lawmakers of the Congress cannot vote in Tuesday's floor test as they were "rightly or wrongly" disqualified by the Uttarakhand Speaker just before President's Rule was imposed in the state.

This gives Mr Rawat two advantages. He calls for the floor test and he has to prove the support of only 31 lawmakers as the strength of the 70-member house will be down to 61, with the nine dissidents not voting.

Harish Rawat, whose government was dismissed when the Centre enforced President's Rule in the state, has claimed all along that his party continues to have a majority, and has repeatedly sought that he be allowed to prove it on the floor of the house.

President's Rule in Uttarakhand will  be suspended on Tuesday for the floor test, which will be held between 11am and 1 pm; the top court will appoint an observer and the entire proceedings will be videographed.

The BJP-ruled Centre says Harish Rawat lost his majority when the nine Congress dissidents voted against his government's annual budget on March 18. It has cited that as one of the reasons for taking charge of the state through Governor KK Paul on March 27, a day before Mr Rawat was to take a floor test.

More proof of the constitutional crisis that had gripped Uttarakhand, according to the Centre, lies in the fact that a video claimed to show Mr Rawat trying to bribe the Congress dissidents to return to the party fold. He has denounced the sting as doctored, but the CBI has summoned him on Monday for interrogation, reportedly because the footage has been established as authentic.