For Arvind Kejriwal, Another Celebration Today - His Wife's Birthday 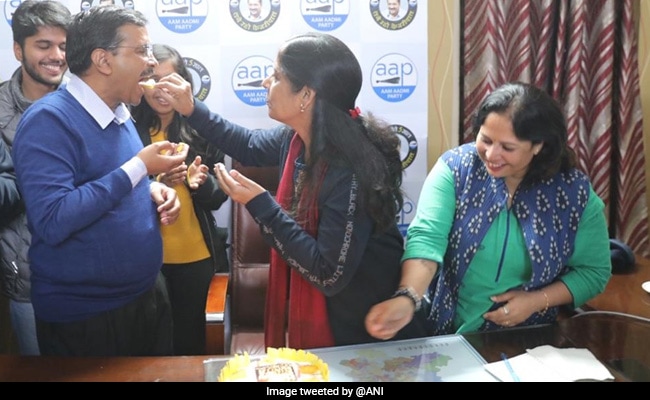 Delhi election results 2020: Arvind Kejriwal and Sunita offer cake to each other

Delhi Chief Minister Arvind Kejriwal's wife Sunita Kejriwal's birthday falls today, a big day for the Aam Aadmi Party as trends on the Election Commission's website shows the party leading on 55 seats as against the BJP's 15 in the election to the 70-member assembly.

In photos, Mr Kejriwal and his wife are seen greeting each other with cake, surrounded by party workers and leaders.

People on Twitter gave birthday wishes to Ms Kejriwal, 54, who had campaigned extensively for her husband. Both were officers of the Indian Revenue Service before Mr Kejriwal joined politics.

"Happy Birthday Sunita Kejriwal Maa'm God bless you and entire family. You are the strength of our hero. Proud of you," a Twitter user Anil Siwach tweeted.

Another user, John Rayhan, tweeted, "What a day to celebrate birthday!! Happy birthday to Sunita Kejriwal ma'am, the force behind the man of the day today @ArvindKejriwal"

On voting day last week, Ms Sunita had tweeted a family photo outside a polling station. She said her son voted for the first time in any election.

She had campaigned for her husband before the Delhi election, going from door-to-door with AAP workers. On attacks by BJP leaders who called her husband a "terrorist", she had said, "I think people will give them (BJP leaders) a befitting reply. It's been 25 years since we are married. He (Arvind) has always told social service is his passion. Those who are saying even they know are lying... either they are under some sort of pressure or they lack an individual identity."

The AAP surged ahead of the BJP in early leads as the counting of votes started this morning, but remained way below the 67 it won in 2015. An aggregate of five exit polls have given it 56 seats.

The BJP, after a slow start, made steady gains, moving ahead in more than 10 seats - a huge leap over its 3 seats of 2015 and even the 14 predicted by an aggregate of exit polls. As AAP started building a stage for its victory speech, state BJP chief Manoj Tiwari, who predicted 55-odd seats for his party, reminded supporters that many rounds of counting are still to come.