The flight was carrying a total 146 passengers of which 145 came to Indore. These were all medical students who had gone to Kyrgyzstan to study. One passenger was taken to Delhi. 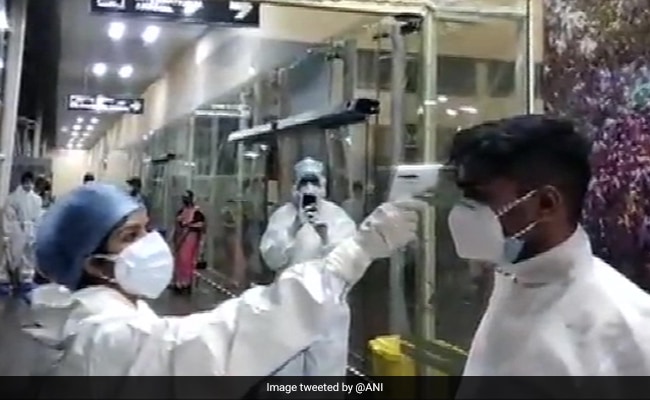 Families had reached Indore to receive their children from the airport

The flight was carrying a total 146 passengers of which 145 came to Indore. These were all medical students who had gone to Kyrgyzstan to study. One passenger was taken to Delhi.

Nodal Officer for coronavirus Dr Amit Malakar told that among the passengers who reached Indore some of them are from Madhya Pradesh, Chhattisgarh and other states.

"An Air India flight brought back 145 passengers to Indore. All the passengers will be kept under institutional paid quarantine for seven days while they will then be quarantined at home for seven days. All of them were checked by the Health Department at the airport," he added.

Families had reached Indore to receive their children from the airport.

Speaking to ANI, Abdul Sattar, a resident of Bhopal said, "My two daughters are returning after completing there MBBS. They do visit us every year in the month of June. They stayed inside their house for three months there."

"My daughter is pursuing medical course currently, it's been five years almost. She came in June last year but due to COVID-19 crisis she couldn't visit us this year but finally, she is returning today. Students, there are in panic but now they are returning," said Pradeep Kumar, a resident of Chhattisgarh.

The fifth phase of the Government of India's "Vande Bharat" mission, aimed at evacuating Indian nationals stranded in various foreign countries owing to restrictions on air travel, will begin early next month, August 1.

The government started Vande Bharat Mission on May 7. The mission is in its fourth phase now.