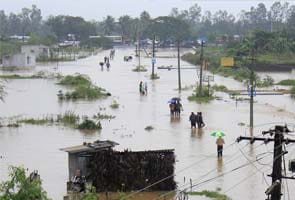 Bhubaneswar: Flash floods triggered by incessant rains have killed one person, displaced hundreds of people and damaged paddy crops in Odisha, an official said on Tuesday.

Although Cyclone Nilam in the Bay of Bengal weakened into a depression, it triggered heavy rains across the state during last five days, Revenue and Disaster Management Department Minister Surya Narayan Patro, told IANS.

The five districts affected by the flash floods are Ganjam, Khordha, Cuttack, Puri and Rayagada, he said.

Ganjam was worst hit where paddy crops on more than 25,000 hectres of area have been affected. More than 1,000 people have been provided shelters after rain water entered into their homes, Mr Patro said.

One person was swept away in the flood water in Sorada area in Ganjam district. At least three people have sustained injuries in separate incidents in Aska area after walls of their houses collapsed, he said.

Those displaced by the flash floods have been provided relief for three days.

The state government has asked the collectors of all the affected districts to submit reports on the damage in their regions as soon as possible, said the minister.

According to preliminary estimate, the number of people affected by the rains and flash floods would be more than a lakh, Mr Patro pointed out.

The situation may worsen in some area as the weather office predicted more rain during next two days.