First Tripura-Bangladesh Train Likely To Be Flagged Off Next Year

The 15 km-long railway line project is being jointly implemented by the Indian and the Bangladesh Railways, and is expected to be completed by 2020. 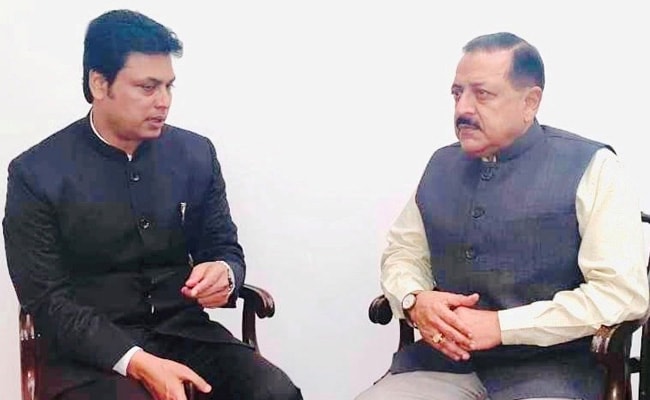 The construction of a railway track from Tripura to Bangladesh is underway to run the first train from the state to the neighbouring country, Union Minister Jitendra Singh said on Monday.

The cross-border train service, which is expected to start next year, was discussed by Mr Singh and Tripura Chief Minister Biplab Kumar Deb, who called on the minister.

The Union minister for development of the north eastern region (DoNER) discussed with Mr Deb the progress of the railway track's construction, according to an official statement.

The first-ever train from Tripura to Bangladesh's Akhaura will leave from the state's capital Agartala, it said.

The 15 km-long railway line project is being jointly implemented by the Indian Railways and the Bangladesh Railways, and is expected to be completed by 2020.

The project will improve connectivity and boost trade between the two countries. It will also connect West Bengal and Tripura through Bangladesh.

The cost of the project is Rs 972.52 crore, which is being funded by the DoNER ministry on the Indian side and by the Ministry of External Affairs on the Bangladesh side.

During the meeting, Mr Singh and Mr Deb discussed several issues related to development projects and civil services in Tripura.

The chief minister handed over to the DoNER minister a list of infrastructure projects, mainly concerning roads and buildings, and sought assistance from the ministry and the North Eastern Council (NEC).

Jitendra Singh said the Modi government has always been liberal in providing every kind of assistance to the Northeastern states and issued instructions for holding a meeting between the officials of the Tripura government to look into the proposals submitted by the state.