The train, which is Bengal's first "shramik" service, will be followed by a second from Kerala, Chief Minister Mamata Banerjee said 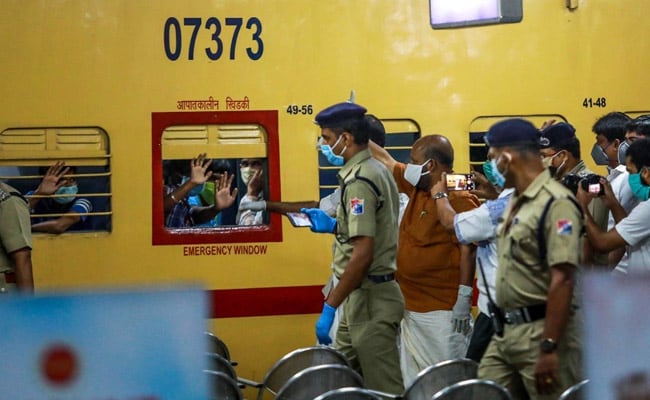 A "shramik (worker)" train carrying 1,200 migrants from Bengal stranded in Rajasthan due to the coronavirus lockdown will depart today, Bengal Governor Jagdeep Dhankar said on Sunday evening. The train, which is Bengal's first "shramik" service, will leave from Ajmer and terminate at Durgapur via Asansol on May 5, Mr Dhankar said, adding that the return of stranded migrants had been arranged after a discussion with Union Railway Minister Piyush Goyal.

"Had discussion with Railway Minister Piyush Goyal yesterday for facilitating return of migrants to our state. One special train, likely to reach and terminate at Durgapur via Asansol on May 5, scheduled to depart from Rajasthan (Ajmer) carrying migrants," the Governor tweeted.

Had discussion with Railway Minister Piyush Goyal yesterday for facilitating return of migrants to our State.

One special train likely to reach and terminate at Durgapur via Asansol on 5th May scheduled to be departed from Rajasthan (Ajmer) carrying migrant from WB.

The special train is one of several "shramik" trains that are being run by Indian Railways to return migrant workers, students and others stuck across the country due to the lockdown.

"As a part of our promise to bring back citizens of Bengal stranded in other states, 2 special trains from Ajmer and Kerala will leave tomorrow for West Bengal, carrying more than 2,500 migrant labourers, pilgrims, students and patients," she said, adding passengers would be "screened as per protocols".

As a part of our promise to bring back citizens of Bengal stranded in other states, 2 special trains from Ajmer & Kerala would leave tomorrow for West Bengal carrying more than 2500 migrant labourers,pilgrims,students & patients. Everyone coming in to be screened as per protocols

On Wednesday, with concerns being expressed over their physical and mental condition, the centre permitted travel of migrants and others, providing they displayed no COVID-19 symptoms.

The government had only allowed travel by road but states pointed to challenges in transporting lakhs of people across hundreds of kilometres in buses, with social distancing a particular concern,

As a result, "special" trains were allowed, with strict rules to be followed regarding disinfection of coaches, screening of passengers and maintaining social distance during travel.

Each "shramik" train will carry between 1,000 and 1,200 people to ensure social distancing. All passengers will be screened for symptoms prior to boarding; only asymptomatic people will be allowed, the Railways said earlier this week while announcing the service.

"It will be mandatory for every passenger to wear a face mask," the national transporter also said, adding that passengers would be screened on arrival too; those with symptoms will be quarantined.

The first "shramik" train departed Telangana's Lingampally district at 4.30 am Friday. Bound for Hatia in Jharkhand, it carried 1,200 migrants from Hyderabad and reached its destination later in the day.

Four other trains were run the same day - from Nashik to Bhopal in Madhya Pradesh, from Aluva in Kerala to Odisha's Bhubaneswar and from Jaipur and Kota in Rajasthan to Bihar's Patna and Hatia.

On Saturday more such trains were run, including one from Nashik to Lucknow and several from Kerala to states like Bihar, Odisha and Jharkhand.