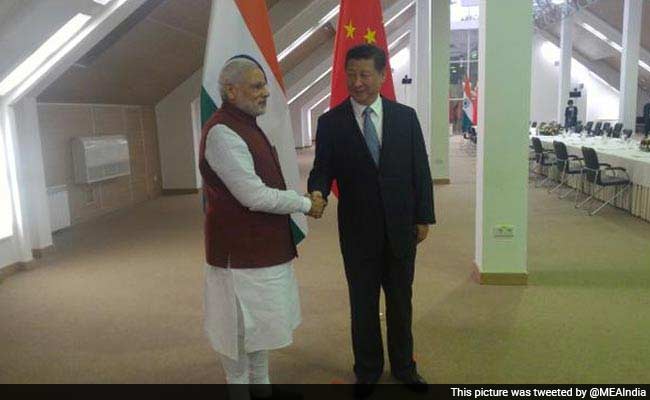 India's Foreign Secretary S Jaishankar said after the 85-minute meeting, "the Chinese side was impressed with the clarity and directness in which this issue was raised. The PM made our concerns very well known."

The Prime Minister also reiterated India's concern over China's plans for a $46 billion economic corridor through Pakistan-Occupied Kashmir. The two leaders, who had last met in China in May this year, discussed border issues too.

"Great meeting President Xi Jinping again. Our talks were comprehensive & a lot of topics came up for discussion (sic)," PM Modi tweeted after the meeting.

It was the fourth bilateral meeting between the two leaders since their first in Fortaleza, Brazil, last July. In September 2014, Mr Xi had visited India and PM Modi made a three-day trip to China in May.

The two leaders are in Ufa, Russia, to attend the BRICS summit on Thursday and the Shanghai Cooperation Organisation or SCO summit on Friday. PM Modi will hold bilateral talks with Pakistan Prime Minister Nawaz Sharif on the sidelines of the second summit.

Last month, China had blocked India's move in the United Nations for action against Pakistan for the release from jail of Lakhvi in April this year.

The UN Sanctions Committee, which had met at India's request, was to seek a clarification from Pakistan on Lakhvi's release in the 26/11 Mumbai attacks trial, but China blocked the move saying India had not provided sufficient information.