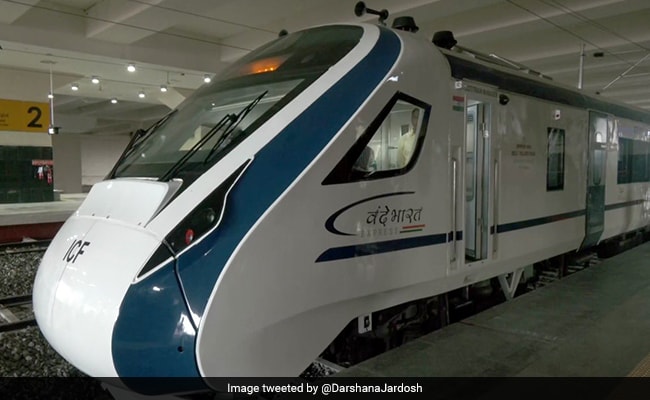 The latest incident occurred in Gujarat on Thursday evening. (File)

The Western Railway (WR) on Friday said it would install fences along the Mumbai-Ahmedabad route by May next year to stop animals from straying onto the tracks and getting run over by trains, a move coming in the backdrop of the prestigious Vande Bharat Express hitting cattle four times since its launch on September 30.

Addressing a press conference at the railway zone's headquarters at Churchgate here, WR General Manager Ashok Kumar Misra said tenders have been invited for the construction of the fences on the 620-kilometre-long route, which is expected to cost Rs 264 crore.

The third semi high-speed Vande Bharat Express, flagged off by Prime Minister Narendra Modi on September 30 between Gandhinagar in Gujarat and the country's financial capital, has hit cattle four times so far, leading to minor damage to the aerodynamic nose of the state-of-the-art rake.

The latest incident occurred between Udvada and Vapi stations in Gujarat on Thursday evening.

According to Western Railway officials, the stainless steel fences will be a "w-beam" structure at a height of 1.5 metres from the ground.

"We are going to install it (w-beam) at a height of 1.5 meters. The advantage is that people can cross it but not animals," Mr Misra explained.

He said Railway staffers as well as personnel from the Railway Protection Force are visiting villages along the tracks to speak to people in order to overcome the problem (of cattle straying into the way of trains).

The aerodynamic design of the nose ensures animals don't get tangled in the underbelly of the rake after such crashes, Mr Misra said.

WR chief public relations officer Sumit Thakur said the Vande Bharat service was running with an average occupancy of 130 per cent and has become tremendously popular with passengers.

Meanwhile, Mr Misra said WR has received two extra air-conditioned suburban trains though he did give a date when these will be introduced.

At present, 79 of the 1,383 suburban services operated by WR in Mumbai are air-conditioned ones.

The dip in passengers when compared to pre-COVID-19 levels was mainly due to employees moving to 'work from home' mode and shift of offices from south Mumbai to the Bandra-Kurla Complex (BKC) in suburban Mumbai, Mr Misra said, adding WR was thinking of increasing services as per the changed travel patterns.

Queried on shift in suburban travel patterns, Mr Misra said there was no strong possibility of many passengers moving onto personal vehicles, though he agreed some may opt for metro rail.

However, data on the number of people shifting from WR's suburban network to the metro rail system was not available, he added.

Updating on the construction of the Delisle bridge over the tracks at Lower Parel, Mr Misra said the portion above Railway territory will be completed by January 2023.

The General Manager said WR had handed over the structure to the Brihanmumbai Municipal Corporation for further work in the civic body's jurisdiction.