Last year in October, the Jawaharlal Nehru University (JNU) administration announced a hike in hostel fee, including introduction of service and utility charges. 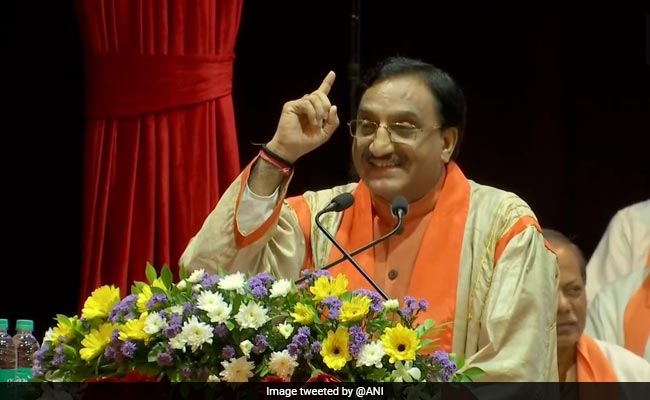 Students who want to study should not be disturbed: Ramesh Pokhriyal Nishank

Calls for the removal of JNU Vice Chancellor M Jagadesh Kumar are now not reasonable as the basic demand of students on hostel fee hike has been met, says Union Education Minister Ramesh Pokhriyal "Nishank".

The situation in the university is turning normal and students who want to study should not be disturbed, the minister told PTI in an interview.

Last year in October, the Jawaharlal Nehru University (JNU) administration announced a hike in hostel fee, including introduction of service and utility charges.

Following this, students took to streets demanding a roll back, prompting the human resource development (HRD) ministry to form a three-member panel to mediate between the agitating students and the administration to restore normalcy in the campus.

"The basic demand of students about the hostel fee hike has been met. The calls for JNU VC's removal now are not reasonable, removing anybody is not the solution," Mr Pokhriyal said.

After a series of meetings with the JNU Students' Union (JNUSU) and the varsity administration, the ministry had directed the University Grants Commission (UGC) to fund the utility and service charge, and appealed to the students to call off their agitation.

On the JNUSU's decision to move court against amendments in the hostel manual, including the fee hike, and continue its boycott of the semester registration process, Mr Pokhriyal said, "It is the university''s call on what to do next".

"I have been told that over 80 per cent students have already registered for the winter semester and more people are registering," he said, adding that "if our universities have to excel in the global competition, we need to rise above these issues."

The students' union on Tuesday moved the Delhi High Court challenging the inter-hostel administration's decision on amending the hostel manual, saying the amendment is "malafide, arbitrary and illegal", and adversely affects students.

The academic issue has been resolved, the situation is turning normal at the university, and as far as the violence case is concerned, police are investigating it, Mr Pokhriyal said.

Early this month, the university had witnessed a tussle between student groups over the issue of semester registration.On January 5, masked men had gone on a rampage inside the campus assaulting students and teachers, and storming hostels, drawing widespread outrage.

Mr Pokhriyal said students should start studying because there is no issue now and time should not be wasted. JNU is a prestigious university, "we want to ensure an atmosphere for students to excel", he said.

As clamour grew for Jagadesh Kumar's removal following hostel fee hike and the January 5 violence, the ministry had ruled out sacking him, saying the government's focus is to address the main issues that have cropped up on the campus.

The minister reiterated that universities will not be allowed to turn into battlefields.

"We don't want anarchy in universities, we want conducive environment for academics. Our students are going places, we are investing more and more in research with an aim to take our universities and academic institutions among top rankers globally. Let's move forward in that way," he said.

Asserting that the Citizenship (Amendment) Act (CAA) is not aimed at taking away anybody's citizenship, Mr Pokhriyal appealed to students "to explain this to those misleading the public on the issue and indulging in petty politics".

"The CAA is to give citizenship to those with Indian roots, it is not aimed at taking away anybody''s citizenship. I appeal students, who are the future of the country, to explain this to those who are misleading the public on the issue and doing petty politics," he said.

"Because myths are being spread about the law, the image of the country is being harmed as well as damage to public property. The students can play a role in clearing this air," the minister added.