Several locals stood up for the farmers, mostly from Punjab, Haryana, and Uttar Pradesh, even as the police clashed with them. 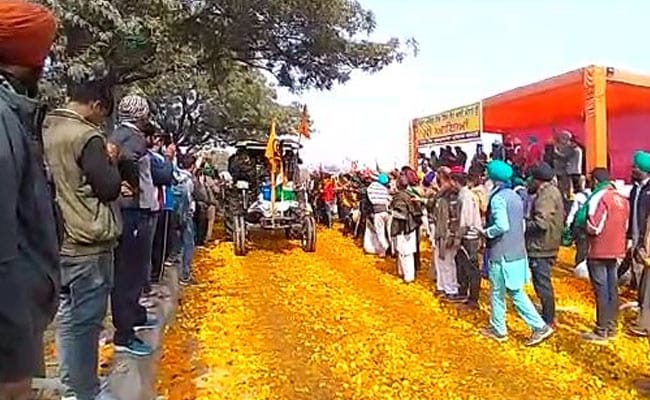 Farmer protesters showering flowers to flag off the tractor rally at the Singhu border point.

Ahead of the chaos that unfolded in parts of Delhi as hundreds of tractors rolled into the city as part of a planned rally, some localities saw the protesting farmers being ushered in by locals with showers of petals and welcoming placards and posters.

The tractor rally, in protest against three Central agricultural laws, was being conducted amid strict security although it veered off the assigned route at many places. Several locals stood up for the farmers, mostly from Punjab, Haryana, and Uttar Pradesh, even as the police clashed with them, using tear gas and batons.

At Swaroop Nagar near the Ghazipur border point, for instance, people showered petals as the farmers' tractors rolled into Delhi, according to ANI.

At Mundka, scores of local residents lined up along the highway, waving to the farmers and scattering flowers on the road to welcome them. Local bands and drummers, too, could be seen at some places as part of the welcoming party. Similar scenes could be witnessed on the Delhi-Karnal bypass near the border, too.

At other places, people reportedly held up placards in support of the protesters. The Singhu border point witnessed groups of farmers themselves setting off the rally with flower carpets and showers.

Meanwhile, many farmers entering the national capital on foot knocked down police barricades even amid a huge police presence, making way for the tractor rally.

Amid celebrations for the 72nd Republic Day across the country, the farmers were allowed to hold their rally after the iconic Republic Day Parade. The farmers had been camping along the Delhi border for nearly two months, protesting against the farm laws passed by Parliament in September.

Several rounds of talks with the government have ended in failure to break the deadlock till now.