Haryana Farmers Hit Back After Chief Minister Says "Protesters Not Ours"

Around 1,500 people from Haryana's Rohtak, Sonepat and Hisar districts have set out on the road to Delhi, farmers said, adding that hundreds more were expected to join

Irate Haryana farmers hit back Saturday after Chief Minister Manohar Lal Khattar said farmers from the BJP-ruled state had "stayed away" from widespread protests over the centre's farm laws, and were not part of the thousands marching on Delhi to stage a joint agitation.

Brandishing Aadhaar cards to establish their identity and disprove Mr Khattar's claim, they said the movement was supported by farmers from Haryana, Punjab and several other states, and that they would not back down till the centre agreed to their demands - to repeal the "anti-farmer" laws.

"Khattarji, now see this. I am a Haryana farmer sitting here with proof. If you want more documents then that also I will give. If not Haryana, then where are we from? Pakistan?" Narender Singh, a farmer from Rohtak district, said as he displayed his Aadhaar card.

"Who says so? Who says there are no Haryana farmers here? The Chief Minister can say what he wants to... this is a free country. But there are a lot of farmers here from Haryana," Ajit Singh, another farmer said, as he identified people around him as neighbours from his village.

Around 1,500 farmers from Haryana's Rohtak, Sonepat and Hisar districts have set out on the road to Delhi, and they will not return till their demands have been met, farmers said.

Hundreds more are expected to join the protests, they added.

Hours earlier Mr Khattar attacked his Punjab counterpart Amarinder Singh, holding him responsible for the "Dilli Chalo" movement - a call to action by the country's farmers who have been marching to the national capital in waves, beating off brutish attempts by the police to stop them.

He insisted Haryana farmers were not part of the protest, and that state police had shown restraint in handling the situation. 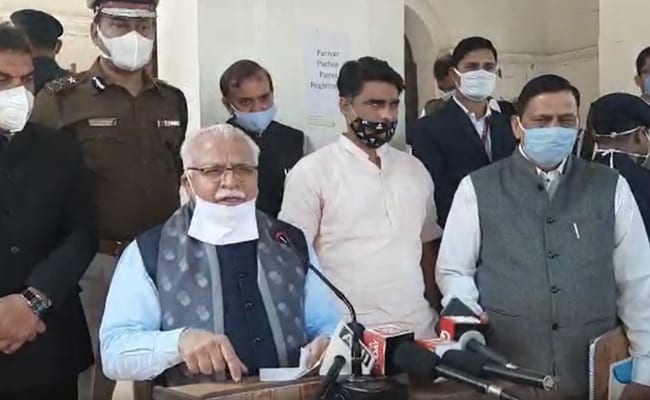 Mr Khattar also criticised Mr Singh for not responding to his phone calls; he said he had been trying to reach the Punjab Chief Minister for three days.

Amarinder Singh said he would not pick up the calls because "I don't like dishonest behaviour".

Thousands of farmers from several states began marching on the national capital on Wednesday.

The farmers are protesting laws that the centre says will reform the agricultural sector by removing middlemen and allowing them (the farmers) to sell produce anywhere in the country.

Farmers and opposition parties allege that the laws will deprive the farmers of guaranteed minimum price for their produce and leave them at the mercy of corporates.